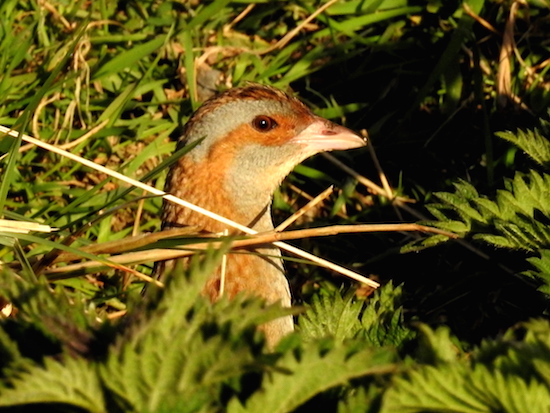 People across Donegal have been given a rare opportunity to hear the corncrake after a tour of their testing sites was launched.

Many people are aware of the serious decline of the Corncrake over the past fifty years. Older generations will recall the Corncrake’s peculiar mating call as the sound of summer. They would have heard it’s rasping voice echoing over the rising meadows.

However, people in Donegal may not appreciate that this county holds one of the last two remaining breeding ranges in Ireland. Along with the other main nesting area of west Mayo and Galway, Donegal holds the key to the survival of the Corncrake in Ireland.

These two breeding grounds are the fine thread by which the Corncrake is holding on here.

The Corncrake is a Summer visitor arriving in April. It likes to stay hidden in long grasses, amongst tall weeds or in damp places. The male makes a shallow nest on the ground concealed in tall vegetation, often in grassland or hayfields.

To attract a female he will begin ‘calling’ occasionally during the day on and off again, but more regularly at dusk reaching a steady peak around midnight and continuing till dawn. This call is a loud repetitive grating sound of ‘krek krek’, from which the scientific name of Crex crex is derived.

This distinctive call is often the only indication of the Corncrake’s presence. It is used by wildlife authorities to count their numbers. When the female arrives she usually lays between 8 and 12 eggs that are cream-coloured with blotches of darker colours. After three weeks downy black chicks hatch out.

In September it heads off escaping the northern winter by flying 10,000km to south-eastern Africa.

For those keen to hear the distinctive call of the secretive and elusive Corncrake there will be a unique opportunity with a series of five night time tours taking place through June and into July this year organised by The Glasshouses in Killult, Falcarragh; natithegloine.com.

If you see or hear a Corncrake please report it to the Corncrake Conservation Project; Marie: 087 656 3527 for Glemcolmcille to Falcarragh and the Islands, or Andy: 089 417 1384 for Dunfanaghy to Inishowen.