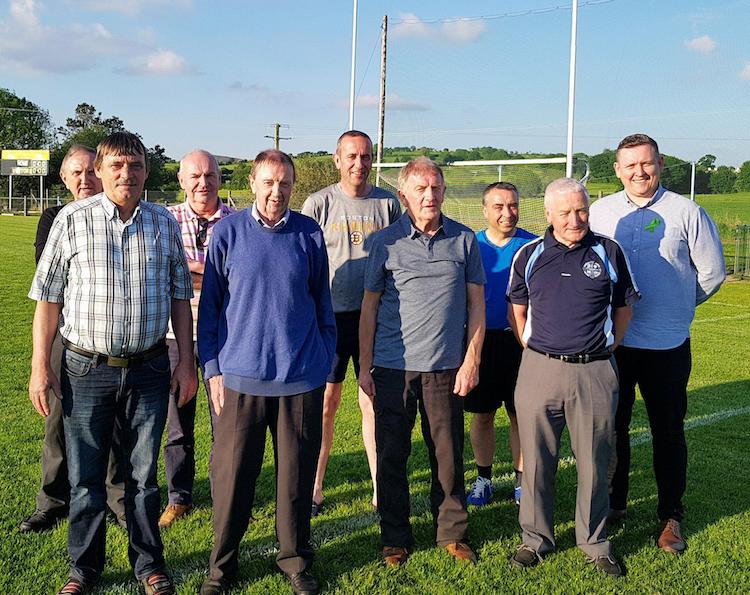 The eight team tournament, which begins on Tuesday 12th June is being held as part of the Club’s Centenary year celebrations, marking 100 years of the Robert Emmets Club.

Included in photo are members of the Robert Emmets Centenary Committee with Kevin Carlin, Father of Shaun T Carlin and PJ Harper, Brother of Sandy Harper.

All eight teams are former winners of the Sandy Harper Tournament, which was once the most prestigious club competition in Donegal. The draw for the quarter finals was made last week in the club grounds, and has thrown up some intriguing fixtures sure to entertain the crowds.

He said: “Sandy Harper and Shaun T Carlin were two outstanding players for Robert Emmets who both had their lives tragically cut short.

“Following their deaths, the Club held memorial tournaments in their honour, and the Club felt it would be fitting to run a tournament this year as part of our Centenary celebrations.”

Centenary Committee Chairman Gary Doherty said: “We are delighted that eight of the former winners of the Sandy Harper Tournament have agreed to participate this year, and we hope to see big crowds in Castlefinn for what promises to be a fantastic competition.

“This tournament will be a particular highlight of our centenary year and I hope we see big crowds down at Pairc Eiméid for these exciting fixtures.”

The quarter final pairings have thrown up some intriguing fixtures, with a couple of local derbies thrown in for good measure. The full fixture list is as follows:

The semi-finals are scheduled for the 25th and 26th of June, with the final to be held on Friday 29th June. All games throw-in at 7.30pm.