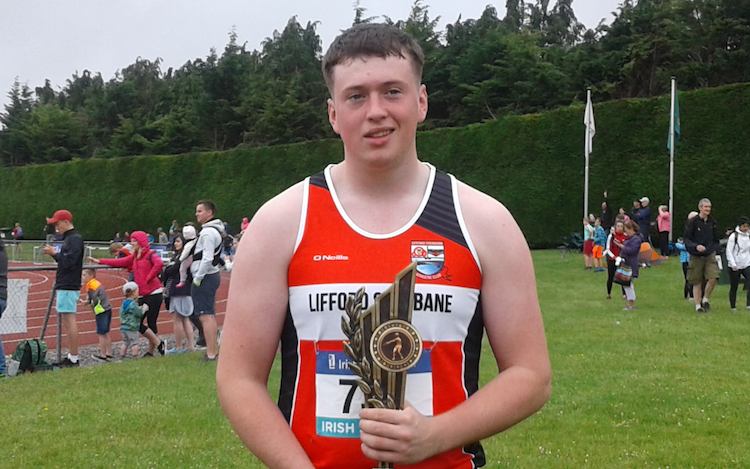 Lifford Strabane AC athletes claimed 3 of the 6 hammer titles on offer at the Irish Schools Track and Field Championships at the weekend and in the process produced two of the longest winning throws in the history of the event.

In the Senior Boys Hammer, Brendan O’Donnell produced a 4th round throw of 65.64m to win the event – the second longest winning throw in Irish Schools history and just over a metre off Gary Halpins Irish Schools record of 66.96m set 34 years ago in 1984. Indeed the Lifford Strabane AC athlete produced a final round throw measured at 69.22m which would not only have shattered the existing record but counted as a World Junior qualification mark, only to be called for the most marginal of circle fouls when his toe touched the front rim of the circle on release.

O’Donnell was awarded the Conway Trophy as Irish Senior Schools Hammer Champion for his endeavours after Irish Olympian Phil Conway and also picked up the D.A.R. Chillingworth Cup for the outstanding performance by a Senior Boy athlete at the recent Ulster Schools Championships.

Adrienne Gallen also produced the second longest ever winning throw in Irish Schools history in the Junior Girls Hammer when producing an audacious second round throw of 50.89m to claim victory. 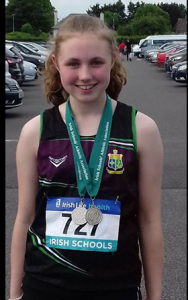 Adrienne Gallen winner of the Junior Girls Hammer title and silver medallist in the Minor Girls Shot Putt at the Irish Schools Championships at the weekend.

This throw has only ever been surpassed by the 54.00m winning distance by Jade Williams from Cavan in 2015 and is all the more remarkable considering that Gallen is underage for this event again in 2019.

Indeed she becomes the first Lifford Strabane AC female athlete to throw over 50m in any category and is certainly one to watch for the future. Gallen further exhibited her throwing credentials on Saturday afternoon when producing a personal best throw of 11.50m to claim a silver medal in the Minor Girls Shot Putt.

Jude McCrossan claimed Lifford Strabane ACs third gold medal of the championships when taking victory in the Junior Boys Hammer with a throw of 44.88m.

This was McCrossans second consecutive Irish Schools Junior Hammer title having also taken the title in 2017.

The Lifford Strabane AC athlete has already gone over 51m on a number of occasions in training this year and is also one to watch for the future.

There were several other stand out performances from Lifford Strabane AC athletes. Harriet McCrossan once again showed her sprinting prowess when taking 4th in the Minor Girls 100m (12.85 secs) and 5th in the Junior Girls 200m (26.62 secs). Ross Henderson threw a personal best of 39.86m to take 4th place in the Intermediate Boys Hammer, just ahead of brother Ryan in 5th place (39.21m).

Olivia Cuskelly once again threw over 40m in the Intermediate Girls Hammer to take 5th place (40.77m), less than 2 metres off a bronze medal.

Aine Marie McBride went over 10 metres for the first time (10.18m) when finishing 9th in the Junior Girls Shot Putt while Cormac O’Donnell was unlucky to foul out in the Junior Boys Hammer with three no throws but will learn greatly from the experience.

A number of Lifford Strabane AC  athletes will be expected to gain selection for the Ulster team for the upcoming Tailteann Games Interprovincial later this month on the back of these performances.