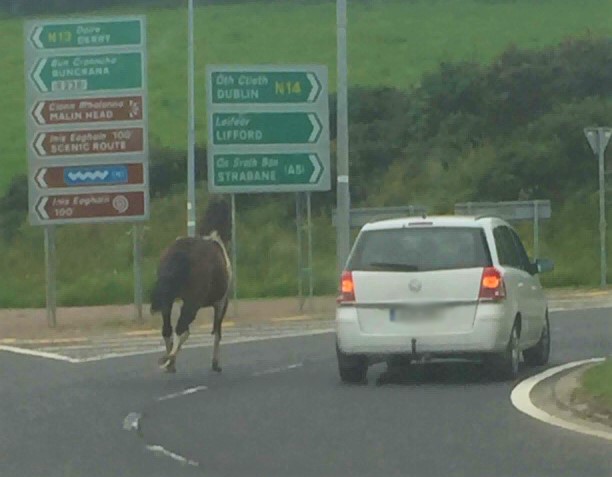 Both the Gardai and the ISPCA are investigating an incident during which a horse was dragged by rope on a busy dual carriageway.

The incident was photographed by a shocked motorist on the dual carriageway outside Letterkenny in Co Donegal this morning.

The woman watched in horror as a passenger held a rope out of a car and led the horse along the dual carriageway at speed just after 10am.

The woman said she was shocked by the incident.

The car can be seen travelling along with its hazard lights on while other cars try to overtake it.

The woman said “I’ve never seen anything like it. It is just cruel and idiotic.”

Gardai have identified the car involved in the incident and a follow-up investigation is underway.

ISPCA Inspector Kevin McGinley confirmed the incident is being followed-up.

He described the behaviour of those in the car as “irresponsible” and “unsafe.”

He said “The ISPCA totally condemn this type of activity. It is irresponsible to subject any animal to this type of unsafe behaviour.

“This activity represents not alone a danger to animals but to road-users alike. This type of behaviour cannot be condoned on any road, not least of all what could be described as the busiest road in the county.

“The ISPAC is liaising the with the Gardai to establish the possible identity of the people responsible for this incident.”