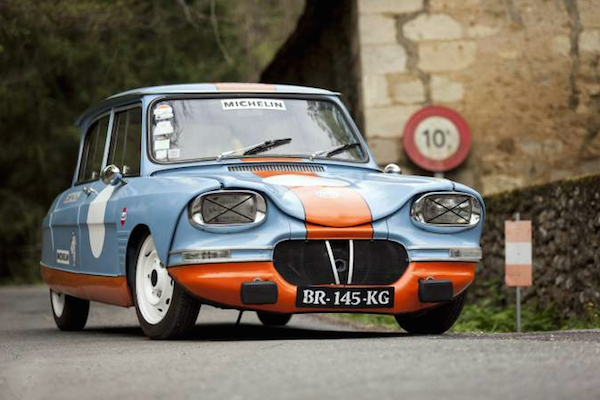 It’s June and nearly Donegal Rally time again. Another year and another set of times and sets of names that will make up the stats that make up the history of the Donegal International Rally.

This week Donegal Daily’s motoring column goes in search of what and who was there before those stats began, before Google and how the hub, the spokes and the rim were formed on the wheels of the Donegal Motor Club to bring the first rally to life.

It’s hard to believe when talking about starting a local rally in Donegal Citroen’s world factory Works Rally were involved. Their team travelled from France to Donegal 48 years ago in the ’70s and it was them that helped point the way for the club’s first rally.

This story (for me) started sitting along a ditch over 30 years ago – as part of a crew fighting a hill fire. When we got the flames under control we were offered a cup of tea by a local man.

“I bet yous boys were never up these windey roads before,” the man asked us.

The driver of our fire engine squared up to the statement, rotated his shoulder blades as he would always do at any challenge and started… “Let me tell you, I have travelled this road in three different modes of transport and also in two different directions.” “Ahh,” the local replied, with total confusion. 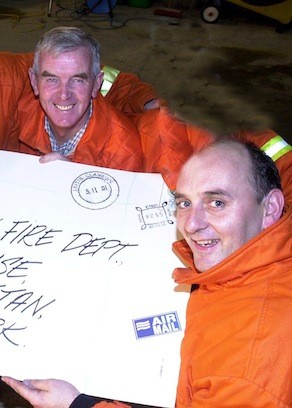 Brian (right) with his good friend, the late Eamonn Harvey on another fund-raising venture a few years back.

Our friend continued “I drove up this road today in a fire engine to fight a hill fire. The first time I drove through here was in a rally car back in 1971, and the third time I drove through here was in reverse. “Gearbox bother then with your rally car,” the local butted in! Harvey, our driver smiled, “Nah,” he replied, “I’m a Donegal County Council truck driver in the daytime, I reversed through this road with a lorry load of road chips behind a tar lorry when sections of the road was tarred and chipped for the first time.”

Phonsie McElwee from Milford also a founder member of the Club takes up the story this week as he recalls his memories of that event.

He gives us a bit more insight into the organising and running of the first ever rally run in Donegal and the French connection. 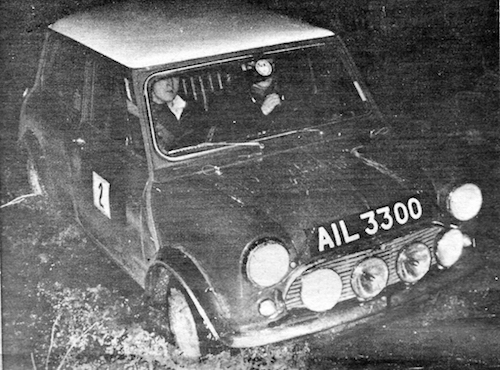 Melvyn Johnston who was the winner of the very first ever Donegal Rally run by the Donegal Motor Club in a Mini Cooper which was based at Logue’s of Cranford.

The first rally run by the Donegal Motor Club was held at Logue’s of Cranford which was the rally head quarters. Logue’s were progressive people. Starting off in Cranford as blacksmiths and then seeing the need to open a public house and also developing a local coach building business to deal with the transport demands in the early days. When the newly formed motor club approached them, Logues of Cranford were willing to give this new sport their support and be hosts for the event. 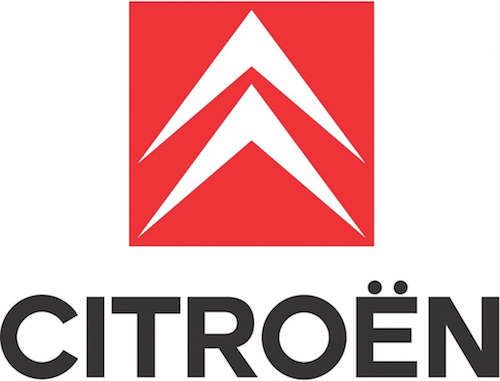 The Citreon logo with its two arrows

Along with the help from Logues, the club also had a world look to their first rally with support by none other than the Citroen Factory Works Rally Team who had travelled from France to Donegal the year before to test a prototype rally car they were developing.

Citroen sent part of their team ahead to Donegal with a complete set of High viz orange directional road arrows with white dots on them which were easily visible for their drivers and development team who used them in the road section that they tested their new rally cars on. 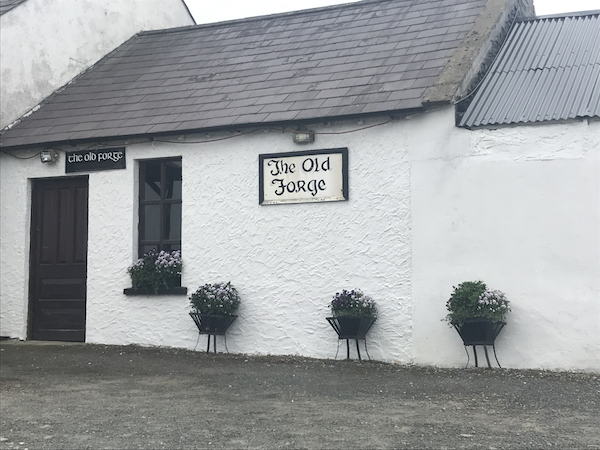 The Citroen team left all the arrows and road marking behind them for the fledging new Donegal Motor Club with the hope that they would be of help if they ever got a rally of their own. The first stage of the first ever Donegal Rally started just down the road from Logues of Cranford up a road opposite the Cranford community hall. Things when well over the stages that headed up into the hills above Cranford with more stages down by Crathlagh and at the waterfall near Milford. 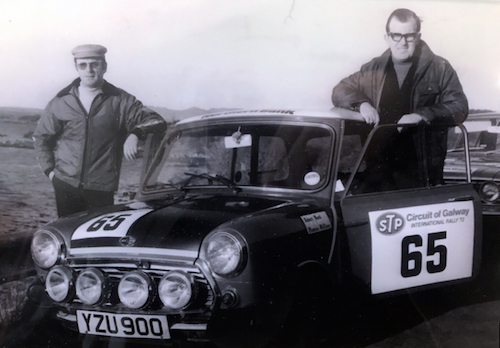 Phonsie Mc Elwee (right) one of the founder members of the Donegal Motor Club who helped us with trace history of the first every Donegal Rally . He is pictured with Robert Ward , also a founder motor club member.

The rally started well and the fancy French finger post went down a treat directing all the rally crews. The hills around Cranford look more like the hills around Monte Carlo with all the French road stage arrows But the club run low on their limited supply and had to make a couple of home-made ones.

Austin Frazer from Fermanagh, the clerk of the course, came up with a novel solution, from his days in the boy scout maybe to make arrows out of branches of trees and the shape of arrow came from where the branch was attached to another one.

The crew were briefed on the international selection of signage and homemade ash branch arrows for the event. But one crew from Omagh in a Reilly Elf weren’t so lucky with their interpretation of the homemade Donegal road signs and went straight on at a junction and ended up in the bog. 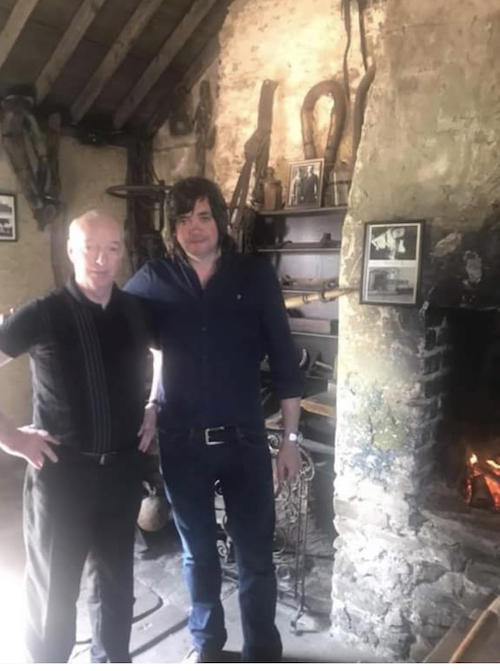 The crew were quickly out of the car and made their way to a nearby house to see if that could get someone to pull their car out. When they knocked at the door they were greeted with a look of fright as both of them had forgotten to remove their state of the art big full face Bell crash helmets and the people of the house thought it was astronauts from the moon.

Cathal Curley is the name always associated with the first ever winner of the Donegal International Rally, the following year in 1972 but Curley was also victorious in the rally in 71 but not as a driver.

This rally that slipped out of the record books it was Curley who was on the winning team in a rare result as a navigator for his fellow county man , Fermanagh’s Melvyn Johnston who drove his in Mini Cooper to victory in Donegal’s first rally. 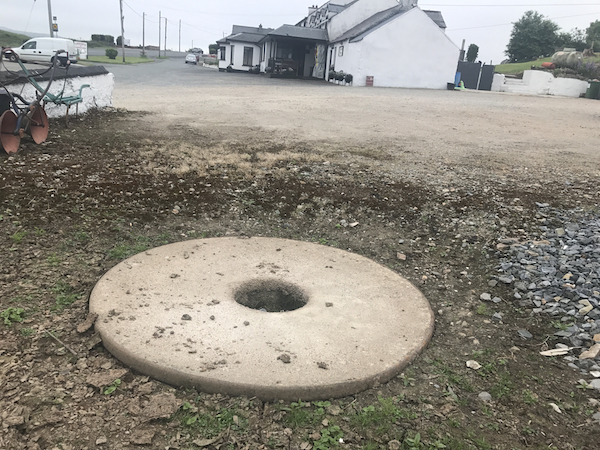 The old stone round slab used to fit iron tyres to wooden wheels outside the old forge at Logues of Cranford. Photo Brian McDaid

When Logues of Cranford first opened for business they shoed horses and also fitting Iron tyres on wooden cart wheels which involved heating a iron wheel at their forge and then quickly fitting it over a wooden wheel and battering it into shape before it started to cool. When the had it in place they would cool it rapidly so it would contract and make the iron try a tight fit in the wooden wheel.

Today the round stone on which this procedure was done is still in the same place in the yard outside the old Forge at Logue’s of Cranford. It seems very fitting that the original way of making the first wheel is in place and the same place as the first wheels of the Donegal Motor Club started to rotate for the clubs very first rally back in 1971. 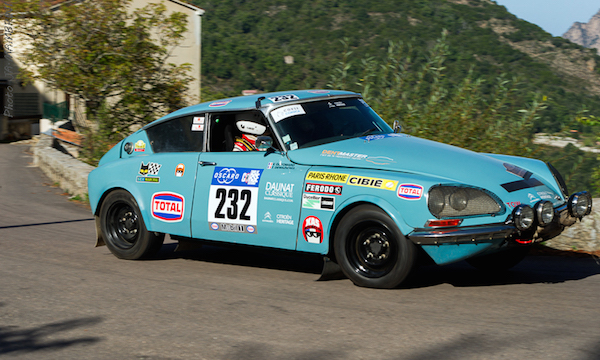 If you ever look closely at the logo on any Citroen, it looks like two arrows one on top of another.
Maybe in memory if their trip to Donegal all them years ago! Apparently, them two arrows symbolise two teeth from a gearbox, as Citroen were leaders in the development of gearboxes and transmission in the early years.

On their motorsport side I think the Citroen team could benefit from another trip to Donegal to sort out their cars which are dropping behind the other teams on the world stage. which forced a great Ulster driver like Meeke to push his Citreon harder to get a result. The end result of this was Citroen terminated Meeke and Nagle Contract from the team.

40 years ago Ari Vatenan was in the same boat as Meeke and was wrecking rings ’round him. He came to Donegal to compete in the rally but mainly to take a break from the world stage.

He won the rally but more importantly for his career after that he started notching up more results than wrecks on the world stage and went on to become a world champion in an outdated car in the early ‘80s. Citroen might never come here again, but Chris Meeke and Paul Nagle could. We have arrows boys…..Here is wishing.