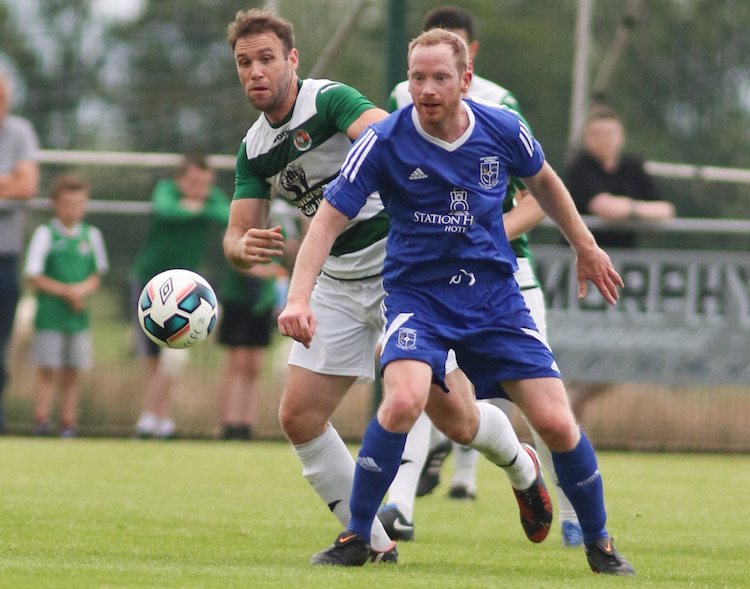 Ronan Doherty opened the scoring for Cockhill and substitute Laurence Toland put the icing on the cake for Cockhill in front of an estimated 800 people at Dry Arch Park.

The momentum looked to have, remarkably and surprisingly, in Letterkenny Rovers’ way over the last few weeks

After a defeat to Cockhill on Easter Monday, Rovers were ten points adrift. Indeed, when Rovers were held to a 2-2 draw by Derry City Reserves last month, Cockhill led the way by six points with three games remaining.

Derry’s subsequent win at the Charlie O’Donnell Sports Grounds left the door ajar for Rovers – and when Steve Okakpo-Emeka drilled in a stunning winner for Rovers in the final League game of the season, it was showdown time.

With Rovers having won the Knockalla Caravans Cup final, there was a feeling that the plates were moving – but a win on Saturday night in the Donegal News USL League Cup final regained Cockhill’s composure and confidence.

Last night, Cockhill were in command of most of the tie and even when Ronan Doherty opened the scoring on the half-hour there was a sense of inevitability about the result.

Gavin Cullen’s save from Kevin McGrath was a massive turning point as Laurence Toland doubled the lead immediately after. Small margins can sometimes feel the biggest.

2. ‘Super sub’ Toland does it once more

The Donegal News USL League Cup final on Saturday night at Maginn Park was still delicately poised on the knife’s edge when Laurence Toland was sent into action. Toland was on just a matter of moments when he opened the scoring in that game – and his second goal was the cherry on a 3-1 win in that game.

Toland has been hampered by a shoulder injury of late and it was surely tempting for Gavin Cullen to start the Ramelton man last night.

Cullen gambled and kept Toland in reserve. When the call came on the hour, Toland was ready to deliver once more – and he did just that.

He was on for just two minutes when Ronan Doherty slipped the ball down the left channel and Toland, from a very acute angle, slid beyond Rory Kelly, the Letterkenny Rovers goalkeeper, for a second, killer, goal.

Toland has been one of the USL’s most consistent performers over the last 15 years or so, but had only a couple of Cup successes until he joined Cockhill last summer.

This was his first ever League triumph and he more than played his part in history.

The standard of soccer in Donegal is often decried and many believe that the levels have slipped dramatically in recent years.

But if that is true – and it is a debate that could go on for quite some time – then the last few weeks have shown, at least, that the appetite among the Donegal public is alive and well for the local game.

The frustrating part, perhaps, is that applies only when the stakes are so high.

Last night, around 800 people turned up to provide a fitting backdrop to a game of such importance. With the season’s work on the line, the huge crowd at the excellent Dry Arch Park showed the Ulster Senior League in an excellent light.

Last night, there were no other big events happening locally nor was there a tv game to deflect attention but it showed that the thirst for the game can still be found. The presence of Finn Harps manager Ollie Horgan and Institute boss Paddy McLaughlin at games in the last week shows that the senior clubs are keeping a close eye on the talent in the USL.

You have to go back to 2009 for the last time Letterkenny Rovers corked the champagne to toast a Four Lanterns Ulster Senior League triumph.

Two years ago, Rovers reached the FAI Intermediate Cup final and this year they reached the semi-finals of that competition, losing to Firhouse Clover in a replay.

In the League, Rovers are desperate to end Cockhill’s dominance and, although Fanad United have shown good signs and Derry City Reserves remain a danger, the Leckview Park side are certainly the best placed to do just that.

But this is two near misses now, having come within three points last year and having forced a play-off this time around.

In three of Cockhill’s other four title-winning seasons of that sequence, Rovers have finished third (Derry City, twice, and Drumkeen United, were the second-placed teams there) while they were fourth in the short season of 2014.

Rovers put up a stern test for Cockhill this year with the likes of Ryan McConnell, Rory Kelly and Conor Tourish, in particular, excelling throughout the season. The loss of Sean McCarron and Lee Toland proved fatal, though the addition of Declan Sharkey was an astute move in the spring.

Eamonn McConigley will have work to do in the summer again and it won’t be long before that long, familiar quest for glory begins again.

5. Cockhill’s feat to stand up in any era

The great Fanad United side of the 1990s will live long in the memory for their super feats of achievement and longevity. Fanad captured five Ulster Senior League crowns in a row from 1994-98, until Finn Harps Reserves broke the sequence in 1999.

Cockhill Celtic have now won six Leagues on the spin but, until that famed Fanad outfit, the Inishowen men have won the League Cup each time.

It is a remarkable achievement at any grade. Gavin Cullen’s men showed their muscle and mettle when it really counted.

Their haul of domestic honours sees them eclipse that Fanad run in the 90s. Debates will rage about standards and what not but, regardless, nothing should diminish what Cockhill have managed to do – a feat of endurance and achievement that will stand the test of this or any era.

Now, though, they will know that getting a lasting run in the Intermediate Cup must be their next step – something that player-manager Gavin Cullen has already alluded to over the last couple of seasons.