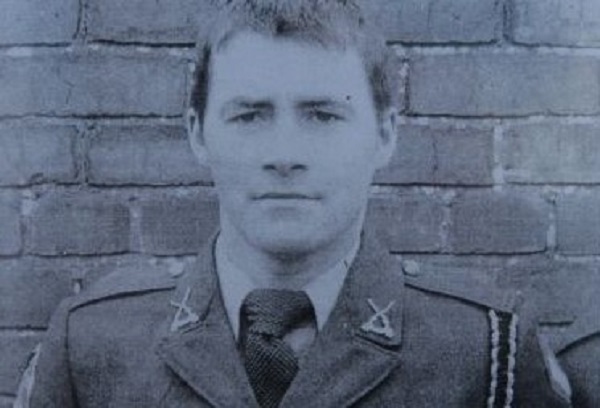 Minister of State for Defence Paul Kehoe has formally apologised to the families of Private Hugh Doherty and Private Caomhan Seoighe following the tragic events in south Lebanon in 1981.

An independent report was published today investigating the circumstances surrounding the death of Private Hugh Doherty from Co. Donegal (pictured above) and the disappearance of Private Caomhán Seoighe from the Aran Islands on 27 April 1981 while serving with the United Nations Interim Force in Lebanon (UNIFIL).

Private Doherty was shot dead at an observation post outside the village of Dyar Ntar, while his colleague Private Seoighe was abducted and believed to have been murdered.

Retired High Court Judge, Mr. Roderick Murphy was appointed in January 2015 to conduct the independent review into the incident.

Families of the young soldiers had been waiting three years for the report, which is now being published following consultation with the Attorney General’s office.

Mr Justice Murphy conducted extensive archival searches and consulted with witnesses to compile the report, which  identifies a number of failings and shortcomings in the Defence Forces operation in UNIFIL at that time.

The report also highlights the manner in which these two soldiers were deployed in an isolated location. This should never have happened, said Minister Kehoe.

Minister Kehoe stated: “I accept the findings and recommendations contained in the report and I want to assure the families, friends and colleagues of these two young soldiers, that important lessons have been learnt for the future.

“Errors that occurred at the time of the incident and, also, in the way the subsequent investigations were conducted and communicated, or indeed, not communicated, must never be repeated. In that regard, I am assured that many of the issues raised in the report have been addressed in the intervening years”.

The Chief of Staff of the Defence Forces, Vice Admiral Mark Mellett stated “I can assure both families that the hard lessons the Defence Forces have learned from this tragic event continue to shape how we train and prepare our personnel for overseas service today and into the future”.

In his report, Mr. Roderick Murphy acknowledged that he had received the fullest co-operation from the Department of Defence and the Defence Forces in the course of conducting his review.

Copies of the report were provided to the Doherty and Seoighe families ahead of publication to allow them time to consider the findings. The Minister met both families in Galway last week, to give them a copy of the report, to go through the recommendations and hear the families concerns.

Speaking in light of that meeting, the Minister said “I want to repeat my apology to both families for the pain and suffering they endured following the tragic loss of their loved ones and I would like to thank them for their patience and cooperation in the completion of this review. I would also like to appeal to the media to respect the privacy of both families following the publication of the report “.