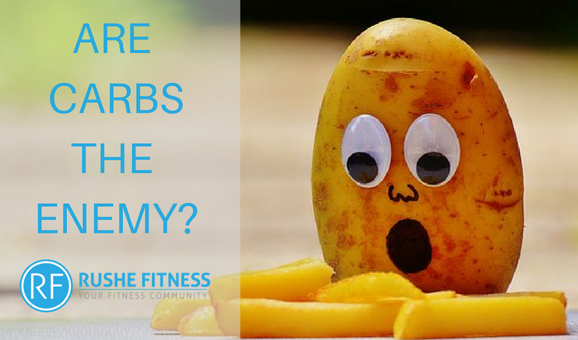 DD Fitness – Are carbs the enemy?

Once again, Carbs are public enemy No1!

The BBC had an episode of their show, The Truth about Carbs in which Dr Faisal Maassarani suggested that “the colour of the carbs you eat also matters – and as Dr Xand van Tulleken explains, it’s the beige ones you really have to watch out for.”

See more on that here: https://www.bbc.co.uk/programmes/b0b5y6c0

It doesn’t seem to matter how many times it’s said or how many studies show that your overall CALORIE intake is the root cause of your weight gain.

Every couple of years, another television show, or documentary or movie or YouTube channel, comes out with another reason that carbs are to blame.

But it isn’t just your carb intake that is to blame, it’s the type you eat and the amount of calories they contain, from carbs AND FATS.

This is because most of the ‘carbs’ that people tend to eat, are junk.
These aren’t solely carbohydrates.

They can quite often have as much fat if not more than carbs, but because of how carbs are vilified and misinformation, people tend to call them carbs.

It’s common knowledge that if you want to lose weight, you simply cannot eat carbs because they make you fat….right?

Carbohydrates are probably the most misunderstood of all the macronutrients.

A few years ago, the humble potato was outlawed and only fools ate them.

As ‘beige’ carbs are now being called the worst type by the BBC and Dr Maassarani, this is sure to make another comeback.

But, the potato is NOT fattening and doesn’t cause weight gain, unless you go over your daily calorie allowance.

In fact, this guy lost 117lbs in a year on a potato diet.

So, if they make you fat, how did he lose weight?

Oh, that’s right, he was in a CALORIE DEFICIT.

If you want to get right down to it, obesity has been steadily on the rise since the 1980’s and continues to climb, but carb and sugar consumption has dropped since the early 2000’s when the low carb movement kicked off in force.

High carb, low carb, no carb; which will give us the best results?

The answer is…all of them.

It depends on what your personal preference is and whether you will be able to sustain the way of eating for a prolonged period.

When it comes to weight loss, the simplicity of reducing carbs or eliminating them from the diet is a big selling point.

People know that once they reduce or eliminate carbs from their diet, they will lose weight.

You have reduced or eliminated an entire food group, probably increased veg, so overall calories have reduced (this is the part that people don’t realise) and weight loss will occur.

What isn’t simple is actually sticking to it.

You are taking staple foods that you have eaten for years and removing them to get success.

These are the usual foods that people will remove when trying to lose weight.

They will initially get weight loss, but this is largely because of fluid loss, muscle glycogen loss and a bit of fat loss.

Once the fluid and muscle glycogen loss slows down you will get your true fat loss.

But, that is the point where people usually get frustrated and give up, because they do not realise that the initial big drop in ‘weight’ at the beginning of the diet is actually from fluid and your weight loss should slow to 1-2lbs per week.

A diet that is based on deprivation is never easy and can lead to binging.

It can lead to a bad relationship with food and when you stop the diet and reintroduce carbs, you will get an increase in ‘weight’ due to muscle glycogen and fluid refilling again.

But again, this is not fat gain.

What we want to achieve when we decide to change our health for the better, is a way that we can do this and be able to enjoy life.

If you can’t do this then what is the point?

I look awesome, but I’m miserable inside??

Not exactly a long-term solution.

So, the question is……CAN YOU LOSE WEIGHT AND STILL EAT CARBS???
Yes, yes you can.

The link below will allow you to work out your daily calories and how much carbs you can allocate yourself per day for your goals.

Emmett Rushe: How to calculate your calorie allowance to hit your goal!

What people should be focusing on reducing is the foods that are often seen as ‘carbs’ but are really treat foods that have loads of carbs, fat and calories in them.

Do you have to remove them altogether?

No, you just can’t have them ALL THE TIME.

You know this already, we are just very good at fooling ourselves to how much of these we eat.

These are treats and should be viewed as such.

Having one or two things from the list each week won’t mess up your goals.

Having one or two each day will.

There will always be a Bogeyman that we like to blame, but the one we need to look at are our overall calorie intake and the amount of junk we eat and drink.

That is how we will get success.
#leanin2018

Our NEW SUMMER SHAPE UP program kicks off on the 25th of June.

If you would like to be in with the chance of winning one of 2 holidays worth €1500, click the link below and I’ll get you signed up.