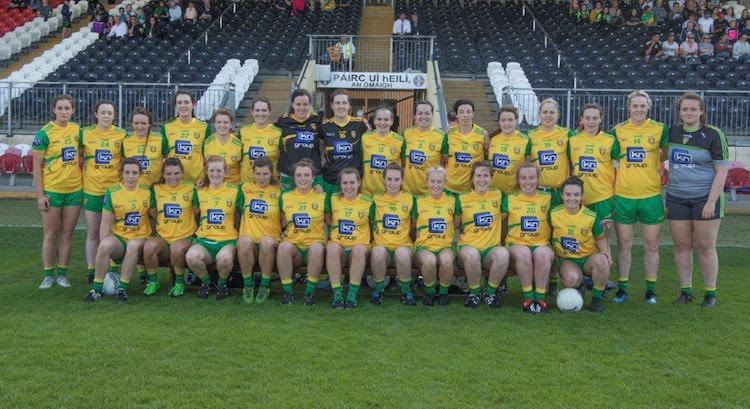 Donegal Ladies booked a place in the Ulster final thanks to an emphatic 14-point win over Monaghan at Healy Park.

Three first-half goals by Eilish Ward, Geraldine McLaughlin and Yvonne Bonner did the spadework for Donegal, who had eight different players on the scoreboard as they sealed a place in Sunday-week’s final against Armagh.

Donegal have ended Monaghan’s remarkable sequence of appearances in Ulster finals with the Farney having played ten successive deciders until now. Ann Marie Burns’ side were bidding to reach an 18th provincial final in 19 years.

Donegal had a dream start with a goal after just four minutes. After Niamh Hegarty was hauled down by Rachel McKenna with a goal inevitable, Eilish Ward – a late replacement on the Donegal XV – stroked home a penalty.

Donegal were dealt a big blow pre-match as captain Karen Guthrie was unavailable as she attended her brother’s wedding, but Ward made an instant impact after Yvonne Bonner and Rosemary Courtney swapped scores.

Monaghan briefly levelled things up but, less than a minute after Muireann Atkinson scored from a free to even the scores, McLaughlin showed her class. Latching onto a ball over the top on the right-hand side, the Termon ace had only one thing on her mind. After dancing inside of her marker, McLaughlin drilled high into the net, firing to the near side past a stunned Linda Martin. 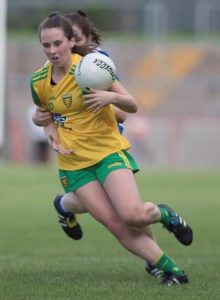 Sarah Jane McDonald on the attack for Donegal

McLaughlin was denied by the feet of Martin, but good improvising from Sarah Jane McDonald got a point out of the move to put Donegal five ahead midway through the opening period.

Deirdre Foley arched over a splendid first-time effort before Bonner palmed to the net when McDonald was denied by Martin and a McLaughlin free opened up a ten-point lead.

Martin prevented Donegal from netting a fourth time as she beat away a stinging Katy Herron shot from close-rage following a sweeping Donegal move.

Donegal began with four players who hadn’t been part of the side for the 4-11 to 0-15 win over the Farney in last summer’s Ulster final in Clones. 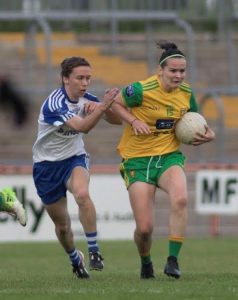 Roisin McCafferty – formerly of Termon and now playing with John Mitchells in Liverpool – took her place in goal with Curran having rotated his goalkeepers during the League, while Olive McCafferty, McDonald and Bridget Gallagher also included from the off here.

Foley, who came on as a sub in that final, began at wing-back this evening.

Monaghan, for their part, had four newbies of their own in the form of Hazel Kingham, Muireann Atkinson, Niamh Callan and Therese Scott.

After a somewhat tepid start to the second half, Monaghan pulled a goal back when Callan finished well having been played in on goal by a clever low hand-pass from Therese Scott and slammed home. 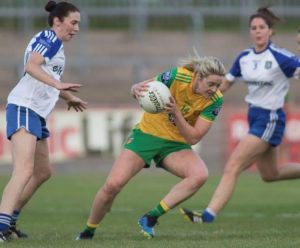 Yvonne Bonner on the ball for Donegal against Monaghan

Donegal responded well with Ward, Aoife McDonnell and McLaughlin tacking on three points in as many minutes and when sub Roisin Friel landed an arrow with the outside of the right boot, they opened up a 12-point gap.

Donegal had seven points in a row to power away before Ellen McCarron stemmed the flow with a free that was her fifth point of the night but the game had long since petering out.