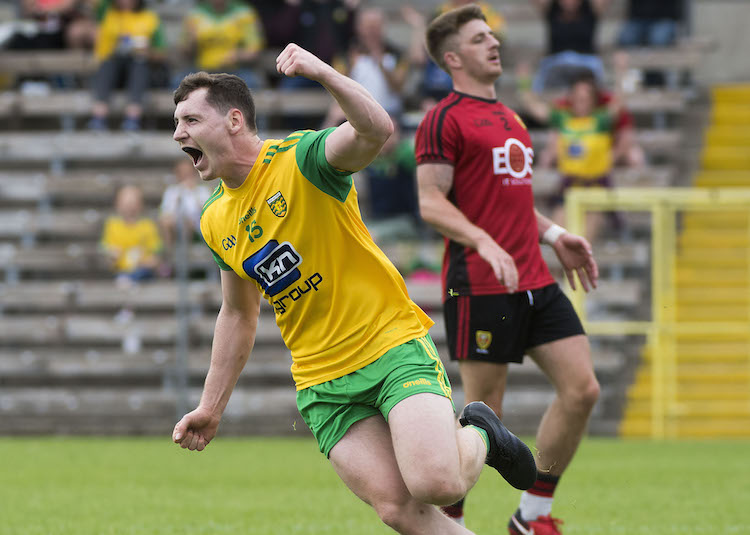 Donegal played an hour with only 14 men, but they were whistling by the end of this lopsided Ulster semi-final in Clones.

Neil McGee’s sending off, after just 13 minutes, would ordinarily have been cause to reach to the panic button, but Donegal steamrolled Down, winning by 13 points, to book a meeting with Fermanagh, and a reunion with former manager Rory Gallagher, in the Ulster final, in two weeks’ time.

It was evident even before McGee’s departure that Donegal were going to take some stopping and goals in either half by Leo McLoone and Jamie Brennan lit the touch paper in front of 12,051.

Donegal led by eight points at half-time and kept up their dominance in the second half. Their tally across three Championship games this year already is an impressive 6-68.

Two points by Patrick McBrearty in the 44th minute widened the margin but Jamie Brennan’s goal was the cue for many of the Down faithful to make for home – with only ten minutes gone in the second half.

Hugh McFadden batted down a kick-out into Ciaran Thompson’s path. Ryan McHugh flicked on his afterburners and transferred inside for Brennan to apply the finish.

Brennan was denied another goal when he struck against the post after sprinting onto the end of a diagonal ball from Bundoran team-mate Paul Brennan and, at the other end, Donegal goalkeeper Shaun Patton kept his own sheet clean with a brilliant save with his feet to deny Donal O’Hare.

Patton was beaten with the final action of the game when Down midfielder Niall Donnelly fired to the net for a last-gasp consolation goal.

Down had shocked Monaghan in last year’s Ulster semi-final before succumbing to Tyrone in the final, but an upset never looked likely here, even when McGee was dismissed.

McGee had already been booked just 90 seconds earlier, going into the book along with Connaire Harrison with the pair having grappled for much of the first ten minutes. As the pair jostled for possession close to the sideline, Harrison went to ground and referee Anthony Nolan brandished the red card to McGee.

The decision drew an angry reaction from the Donegal management and supporters, while Frank McGlynn, who was in close proximity to the incident, was livid as McGee left the action.

McGee had passed a fitness race having had to leave the action against Derry two weeks’ ago through an injury around the same time as his sending off here, but the reduction in numbers didn’t have much of an adverse affect on Donegal.

McBrearty whizzed over after taking a sumptuous pass from Michael Langan and Michael Murphy squeezed inside the upright from a tight angle.

It was feeling like shooting practice for Donegal and they pressed down on the throat with a 22nd minute goal. Ciaran Thompson’s effort came down off the post and McLoone was on hand to fire home.

McHugh was involved in everything good about Donegal and the Kilcar ace, fed by Eoghan Ban Gallagher landed a majestic point off the outside of his right foot.

Down had a mini purple patch that yielded three-in-a-row, but Donegal hit back when a monster Patton kick-out that reached way into the Down half was fielded by Murphy, whose off-load found the scampering McHugh for a score.

Ciaran Thompson became the eighth Donegal player on the board in stoppage time to put Donegal 1-12 to 0-7 in front at the interval.

Odhrán Mac Niallais was initially named in the Donegal XV, but when the teams marched around St Tiernach’s Park, it was the same team that had begun the 2-16 to 0-16 quarter-final win over Derry a fortnight ago.

The sun peered between the clouds just as Anthony Nolan was ready to throw in the ball and Donegal burst out with Paul Brennan firing over after 62 seconds, the Bundoran man peeling away to get on the end of a move that involves Gallagher and Langan.

It was a signal of the Donegal intent and Michael Murphy curled over a delicious free, won by McHugh, and there already felt an air of superiority in the Tir Chonaill ranks.

McHugh took a heavy wallop in the head from Conor Maginn that drew both a yellow card for the Down man and a chance for Patrick McBrearty to open his account. The Kilcar man duly obliged, booming over from just beyond the ’45.

A quick pop-off from McBrearty set Caolan Ward up to open up a four-point lead.

It took Down 25 minute to get a score, via Caolan Mooney, but Donegal were in total command and the second goal from Brennan, put daylight between them.

14-man Donegal cruise into Ulster final with lopsided win over Down was last modified: June 11th, 2018 by Chris McNulty