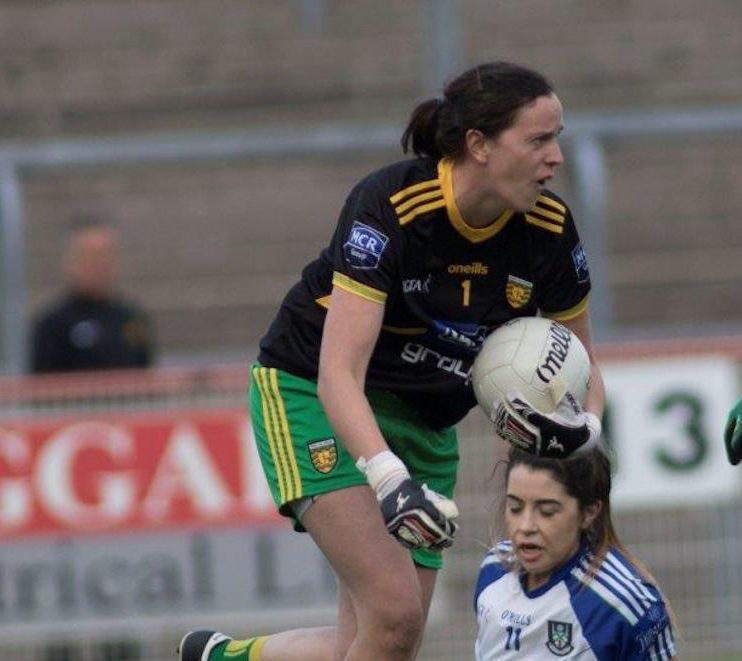 Listen: Roisin McCafferty on commuting and committing for Donegal ladies

Roisin McCafferty was in Liverpool, which is now ‘home’ for the Termon native, when she eventually ceded to Maxi Curran’s calls.

McCafferty (pictured by Joe Boland, North West News Pix), an All-Ireland winner with Termon as a midfielder, answered a call of a different kind. Having initially rebuffed a couple of queries, McCafferty finally agreed in March to make a return to the Donegal senior ladies squad – as a goalkeeper.

Based in Liverpool and playing for John Mitchels was going to pose obvious issues, but McCafferty has embraced her return – and last night helped Donegal reach the Ulster final thanks to a 14-point win over Monaghan in Omagh.

“It’s great to be back in the final,” McCafferty said.

“It’s not the position I’ve been used to, but Maxi has put his trust in me.

“It’s tough going on your own, but I’m blessed I have two housemates who are county standard and they come out to train with me. The flying over and back is tiring, but it’s grand if you eat right and sleep right.”

‘Not a hope’ were the words of McCafferty in February, but she’s found a set-up and a squad that has gone to a new level.

She said: “I’m giving no more commitment than the rest of the girls. Everyone is buying into the same thing. Maxi asked me once or twice and I said to myself that I’d regret it if I didn’t. At the start I didn’t know if I made the right choice.

“It’s a professional set-up and everyone is happy to give the time. Every one in the panel is committing and I can see a big difference from when I was involved three or four years ago.”