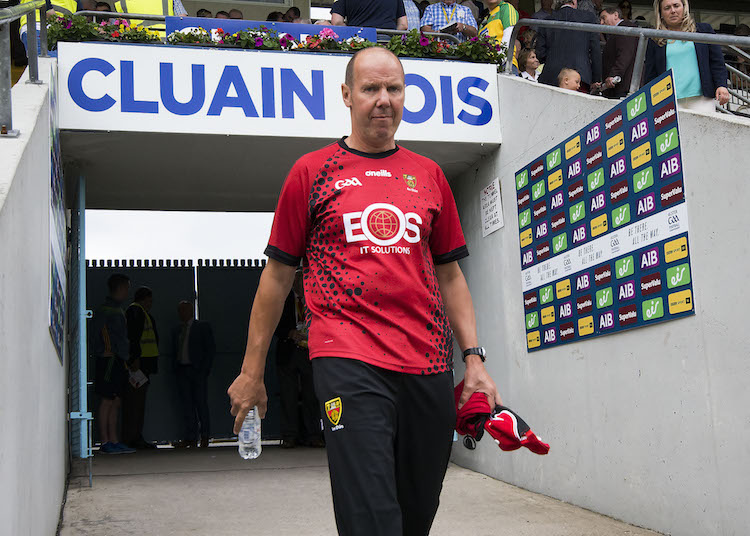 Eamonn Burns could only throw his hands up and admit that yesterday’s Ulster SFC semi-final ‘eased away’ from his Down side.

Donegal scored their first point after 61 seconds and that set the tone for a facile 2-22 to 1-12 win.

Even with Neil McGee sent off, just 13 minutes in, Donegal remained in cruise control for the remainder of the tie.

Donegal were eight ahead at half-time, Leo McLoone’s goal giving them a 1-12 to 0-7 lead, and with Jamie Brennan netting, they were 13 point winners.

“When McGee went off, they’re a very experienced side, they know how to play with 14 men,” Burns said.

“They’re well organised up the field and they leave two men up the field who are very potent so they handled that situation quite well.

“If you were going to beat them you’d have had to put them under pressure all the time, and we didn’t do that. The game eased away from us.

“A good start would’ve been very helpful for us, helped get our confidence up then we had difficulty getting our kick outs away, which became a bit of a chore for us.

“At the start of the second half we’d a lot of possession, got nothing off off it and then they got a couple of scores. The game was starting to move away from us at that stage.”

Burns’s Down had shocked Monaghan in a semi-final last year, but a repeat never looked on the cards from the moment Paul Brennan scored that first Donegal point.

Down now attempt to regroup for the qualifiers.