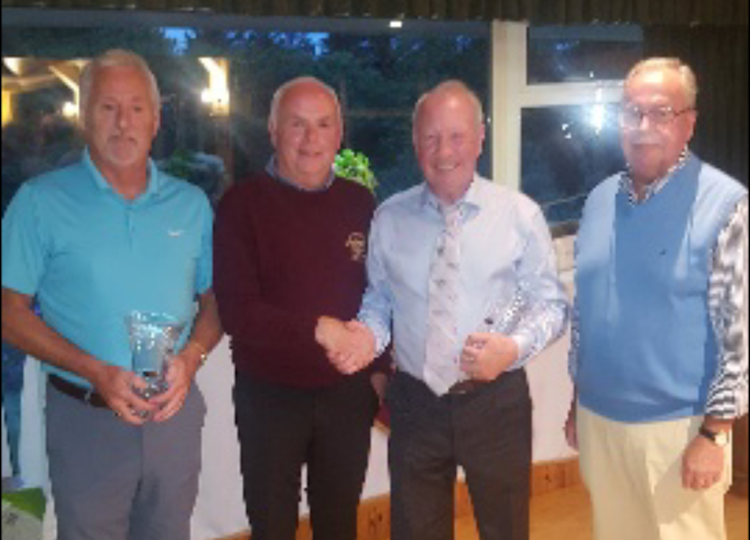 Ballybofey and Stranorlar GC’s Ulster Cup side progress to the next stage.

Ballybofey and Stranorlar’s Ulster Cup team traveled to Omagh for the return leg of their tussle with the Omagh club.

Having won five  matches to two in the first leg, they still required three matches to make it through

. A tough task away from home you might add, but Andy Parkinson’s men fought bravely and achieved the required numbers.

They now meet County Armagh GC in the next round.

Terry Farrell and Margaret Hynes All Ireland foursomes team made the short journey to Letterkenny Golf Club where they took on the might of a great Portsalon side in the Matchplay stage.

This was a very closely contested match and indeed it came down to the very last match where it ended up all square after 18 holes.

The two pairs in this last match then headed off down the 19th which was halved, on to the 20th, again halved and was eventually won on the 21st hole just before daylight began to disappear by the Finn Valley side to the delight of of the rest of the team.

BSGC now go into an open draw for the next stage.

Ivan Stewart keeps his smile going as he had a fantastic Victory in the seaside town of Portstewart where he came away with three matches from five Ivan now has the task of composing his team for the return leg later this week and he knows not to let complacency slip in. Ivan told me that three matches was a great result but it’s still only half time.

B&S Junior Captain Ryan Griffin headed off to Strabane to compete in the scratch Cup and ended up with two fantastic rounds of golf to finish second only behind one of the best players Strabane has produced Enda Kennedy. Enda has won this cup 12 times.

This is a great achievement for young Griffin two get so close to winning his first scratch Cup which I’m sure that everyone that knows him will agree that it’s only a matter of time.

Just a reminder, it’s only four weeks from Saturday until Mr Gerry Drivers Captains Day…  (where has that year gone).

Ballybofey and Stranorlar GC’s Ulster Cup side progress to the next stage. was last modified: June 12th, 2018 by Chris McNulty