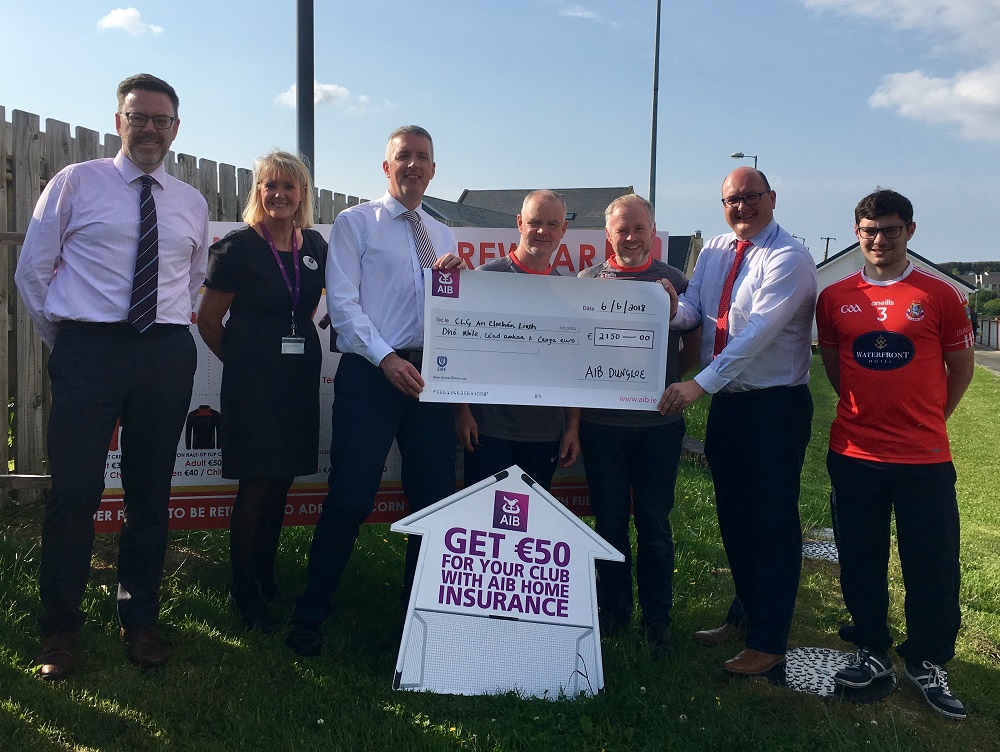 Dungloe GAA have received funding of €2,150 – the second largest donation made to any club in Ireland under an AIB initiative that saw the bank making donations to clubs nominated by home Insurance customers.

Along with some of the GAA powerhouses in Kerry and Dublin it was Dungloe GAA that benefitted the most as AIB Customers, Club Members and Staff responded strongly to the fundraiser.

It all kicked off in April when AIB Staff were welcomed into the club for a League match between Dungloe and Bundoran to promote the initiative.  Expressions of interest were made on the day and followed up over the next few weeks and months resulting in a payment of €2,150 funding to Dungloe GAA.

New Home Insurance customers were asked to nominate their chosen club, with the Bank donating €50 to the club provided the customer’s policy remained in force for three months.But clubs also had to register – a key requirement if they were to be in a position to benefit.

“As someone who has been involved in Clubs and voluntary organisations I know how hard it can be for Clubs to fundraise and I’m thrilled as the Branch Manager of AIB Dungloe that were able to present this amount to Dungloe GAA.

The challenge is now set down to the other GAA Clubs in the region to match or surpass what we have done with Dungloe GAA,” John Bowe told Donegal Daily.

The performance of Dungloe GAA was much to the delight of Barry Naughton the Head of AIB in Donegal as well as he worked and lived in the town in the mid Nineties. “It was a fantastic result for Dungloe GAA to emerge as the second largest beneficiary in the country and I’d like to thank our customers and staff for this achievement,” Mr Naughton said.

Adrian Alcorn, Club Secretary, hopes that the Club can build on the success of this initiative and a return visit to promote the fundraising again is being planned for late summer.

Donegal clubs earned a combined €9,700 under the initiative in 2017 with Dungloe GAA the biggest beneficiary of €2,150 funding followed by Naomh Padraig, Lifford and Carndonagh GAA receiving €700 and €550 respectively. AIB is urging all clubs to ensure they are registered for 2018 and to link with their local branch for materials to promote the initiative with their club members and the local community.