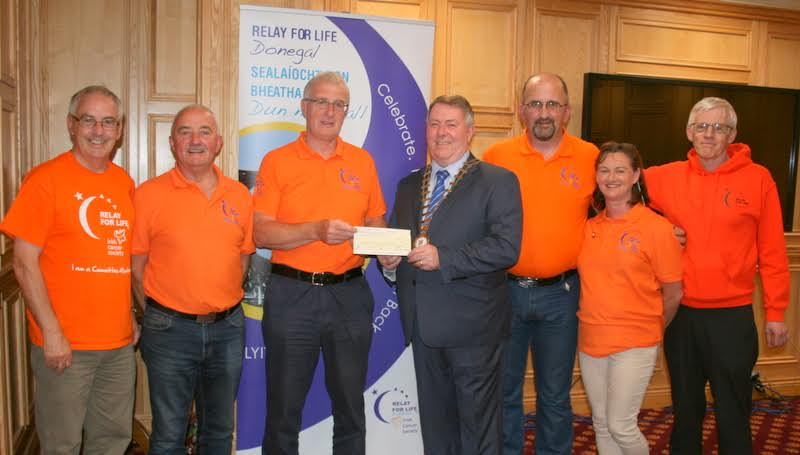 As the local Relay for Life committee continue to count the proceeds from this year’s event, the Cathaoirleach of Donegal County Council, Gerry McMonagle, made a presentation of a cheque for 3,000 euro this week to help offset expenditure.

Up to 60,000 euro has been confirmed to date from the 2018 Relay but with some of the teams who took part the weekend before last still to furnish their funding, this is expected to rise further.

The fund-raising efforts were afforded another timely boost on Monday night with the presentation of the cheque by the Mayor.

“This will help offset the cost of the gig rig while it’s also Donegal County Council’s way of recognising the tremendous work that Relay for Life Donegal does.

“I attended Relay for Life at the LYIT and this wonderful 24 community event deserves support and recognition. I can safely say that there is not a person or a family in Donegal that has not been affected by cancer either directly or indirectly.

“What is special about this event is that while we are remembering and reflecting on the devastation that a cancer diagnosis can bring, we are also gathering strength, generating goodwill and doing something extremely positive in a collective way that shows we are a community, we are in this together, and we will fight cancer in any way we can,” Councillor McMonagle told committee members after handing over the cheque.

Relay for Life Donegal treasurer, Drew Corry, revealed that 60,000 euro has been raised from this year’s event staged at the outset of the month. But, he added, more money would be forthcoming as proceeds continued to be counted up.

Councillor McMonagle had referred to the live streaming of the event which enabled patrons from all over the world to view Relay for Life in Letterkenny.

Thanking the Mayor and Council for the contribution, Chairperson Robert O’Connor disclosed that during the event two years, patrons in forty-five countries worldwide had streamed into the local Relay experience.
A date has already been set for next year’s Relay for Life initiative with the weekend of May 25th and 26th confirmed for the 2019 event.