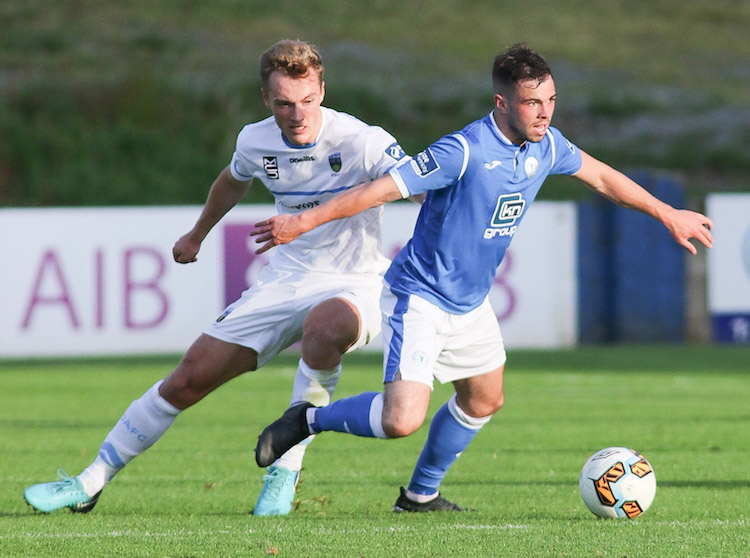 Georgie Kelly’s future has been much debated of late – but the Tooban man struck in the second half as UCD overcame Finn Harps in Ballybofey tonight.

Kelly has been linked to top Premier Division sides Dundalk and Cork City and it was his 71st minute goal that was key for Aaron Callaghan’s side.

Kelly has been in scintillating form for UCD in the last couple of seasons and his goal, alongside a quick-fire brace from Daire O’Connor, gave the First Division leaders the win and hand Harps a third home defeat of the campaign.

Kelly clipped over the advancing Ciaran Gallagher after the ball broke invitingly for him in front of goal.

Six minutes from the end, Harps had a glorious chance to get back into the game, but Jesse Devers was off target with a penalty awarded for a push on Ciaran O’Connor by Liam Scales.

Harps’ night ended on a sour note as sub Ciaran O’Connor was sent off after being booked twice inside a minute. 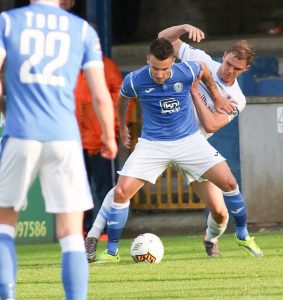 Harps had enjoyed the better of the first half, but they fell behind four minutes into the second half. Jason McClelland did the spadework on the left flank and his low cross was tucked home beneath Gallagher by Daire O’Connor.

Harps had barely had time to catch a breath when O’Connor doubled the UCD advantage. Picking up possession on the right-hand side, there seemed little danger initially, but O’Connor jinked all the way into the penalty area before firing home.

Finn Park was stunned, but the game had its third goal in seven minutes as Harps reduced the deficit.

Michael O’Connor’s long throw-in was headed on by Sam Todd and Place stooped to finish and bring Harps back into the tie, only for Kelly to put it behind their reach.

A combination of the heavy evening traffic in Letterkenny due to the Donegal International Rally and a clash with the televised Spain-Portugal game from the World Cup meant a poor attendance for the visit of the First Division’s leaders to Ballybofey.

Harps thought they had taken the lead just after the half-hour. Mark Timlin recycled play when a deep-set corner made its way to him at the far side of the penalty box.

Cutting neatly onto his left foot, Timlin’s low shot beat UCD ‘keeper Conor Kearns, but Mikey Place was adjudged to have been offside as he jumped over the goal-bound shot.

It had been a game of few chances or talking pints  until that point with Keith Cowan’s flicked header blocked for a corner after six minutes before Place drilled over from 15 yards. 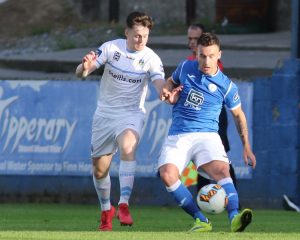 Cowan went close again from a header after 27 minutes from another set piece, but UCD managed to avert the danger amid Harps appeals for a handball that fell upon deaf ears.

Paddy McCourt made his return to the Harps starting line-up on the week where he confirmed that he’ll retire at the end of the current season. The former Celtic winger will take up a new role as the Head of Youth Academy at Derry City later this season and will hang up his boots to concentrate on that post.

There had been fears that McCourt’s departure from Finn Park would be hastened by Derry’s announcement, but the Northern Ireland international was keen to see out his commitments at Finn Park.

McCourt was in from the off here, to take the place of Devers, who was a goalscorer last week as Harps pulled off a fine 2-1 win at Galway United, but the two switched places after 11 minutes of the second half. 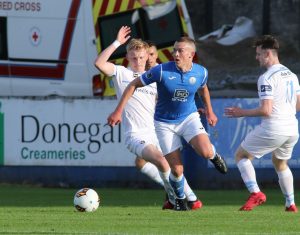 Devers looked set to draw Harps level when he broke into the area in the 63rd minutes but at they near post Kearns brilliantly saved to deny the home side.

However, it was UCD – and Kelly – who pounced for the decisive goal 19 minutes from the end and leave Harps ten points behind the Students.