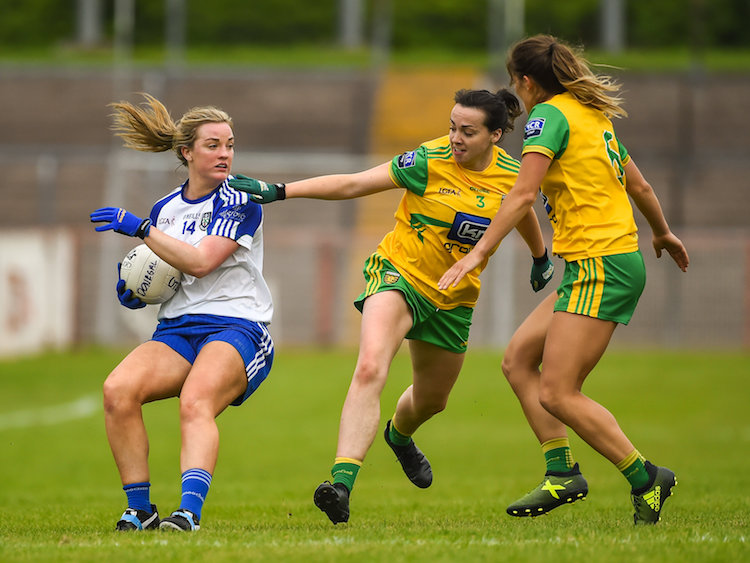 The target is clear: Donegal want to beat Armagh and retain the TG4 Ulster senior football title – the chance to become back-to-back winners for the first time will just be a nice side effect.

A win at Brewster Park on Sunday (3.45pm) would also be Donegal’s third provincial title in the last four attempts, but according to team full-back Nicole McLaughlin, this is a squad focused on nailing their preparation and rediscovering the form that got them past Monaghan by 14 points in the semi-finals.

Ellen McCarron of Monaghan in action against Nicole McLaughlin and Ciara Hegarty of Donegal during the TG4 Ulster Ladies SFC semi-final match between Donegal and Monaghan at Healy Park.

With just seven days separating those two games, Donegal have had to ease off on their physical preparation.

But McLaughlin (23) says the hard slog on the training field is behind them, with mental and tactical preparation key in recent days.

“It was a good win over Monaghan, but we all know it is just a semi-final and we’re just pushing on for the final now,” said McLaughlin, whose sister Geraldine is a marquee forward for Donegal.

“We have so many girls away and it is quite hard for us playing two weeks in a row. But we got together quickly before we all dispersed on Monday. We had a quick look back at the game, but we quickly turned to Armagh.

“Not making the league final has brought us together every weekend and we’re able to work on tactics and we could look at what we wanted for the championship. That is what everyone is focused towards.”

For the first time since her school days, McLaughlin is back living in Donegal this year. After completing her studies at St Patrick’s College in Thurles, Nicole has returned to the hills as a teacher at Loreto Convent in Letterkenny, where Donegal and Termon clubmate Emer Gallagher also teaches.

The ten-hour weekly round trip was quite the slog, and McLaughlin is hopeful that being around will help her team get to the next step.

After last summer’s convincing victory over Monaghan in the Ulster final Donegal were heavily regarded as the danger team in the latter stages of the competition. But as quick as their challenge gained momentum, it was cut off at the knees when Mayo ousted them in the quarter-finals with a six-point victory.

McLaughlin says that loss cut deep in the Donegal camp, and despite having a new manager at the helm in Maxi Curran, you get the impression it has fuelled plenty of tough sessions between then and now.

“Last year was a hard one to take. We worked really hard and maybe we looked past Mayo…I don’t know. They put it up to us and we didn’t perform on the day. That was a really tough loss to take. We did think we had done everything we had to.

A win on Sunday will put Donegal into Group A of the All-Ireland series against Tipperary, along with the loser of the Kerry and Cork Munster final, while defeat will pit them against the Munster champions and Monaghan once again.

“We are not looking too much at Armagh. We know they have some good players and are a good team. We have faced them before over the years and it has been a battle. We expect nothing less.

“It is going to be tough and it’ll be a battle between the two of us. It’s an Ulster final and no one wants to lose so it’s worth going for it.