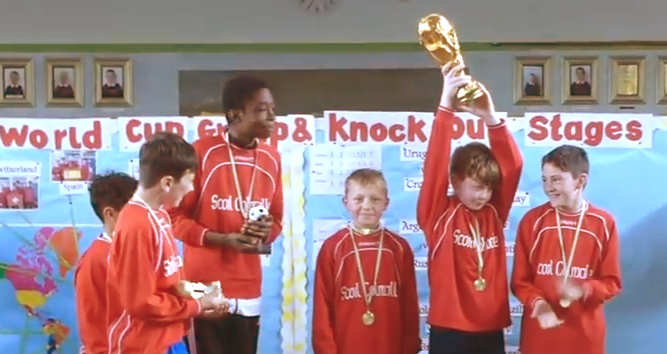 Uruguay won the first ever World Cup in 1930… and their representative team did it again in Scoil Cholmcille’s inaugural Mini World Cup!

Teams played thirty two matches in total and accumulated one hundred and forty five goals over the last number of weeks.

The spectators were treated to a feast of football under the watchful eyes of referee Frank Duff. Uruguay were the tournament’s winners, beating Brazil 4-2 in a closely contested final.

After the excitement of the matches, the boys were treated to a very entertaining Q&A session and an even more entertaining World Cup quiz between Ollie and Dale.  As the winner of the quiz, Dale had the honour of presenting Jack Mc Grenra, the youngest member of Team Uruguay, with the World Cup trophy.

Fun trivia: Uruguay won the very first World Cup in 1930 and Team Uruguay won the inaugural Scoil Cholmcille Mini World Cup.  Could this mean that Suarez and Co will get their hands on the real trophy in Russia in July?

Watch the World Cup action from the school here: