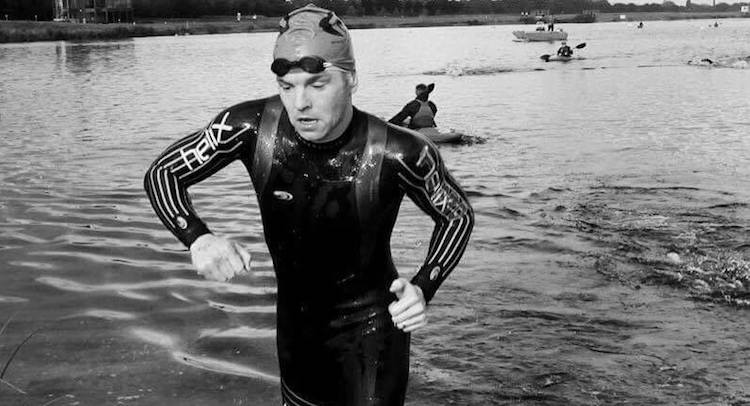 This week, Shane McCauley, a Lifford man, together with Nick Berry, an Englishman, and Euan Lees, a Scotsman, will take up the challenge to swim across the English Channel, from England to France in the name of charity.

The swim, over a distance of, at least, 21 miles/33 kilometres, will raise money for a children’s charity – The Brompton Fountain.

The Brompton Fountain supports children with serious, often life-threatening, medical conditions, who are under the care of Royal Brompton & Harefield NHS Foundation Trust – the largest specialist heart and lung centre in the UK.

All three are members of Ful-On Tri triathlon club in Fulham, London, and this is a life-long dream challenge for them.

The English Channel is a demanding swim; it is the globally-known standard for marathon swimming, and is considered, by many, to be the ultimate long-distance challenge – fewer people have swum the English Channel than have climbed Mount Everest!

It isn’t just the distance that is the challenge, though, but, more, the variable conditions that swimmers are likely to encounter – possible wind force six and wave heights in excess of two metres, in one of the busiest shipping lanes in the world, with 600 tankers, 200 ferries and other vessels passing through daily! Swimmers are exposed to the elements unlike any other endurance athlete.

The water is cold, and the jellyfish are unfriendly!

Their pilot is Reg Brickell, and Shane, Euan and Nick will be swimming alongside Reg’s boat – Viking Princess.

Reg has a vast knowledge of the English Channel, which is invaluable, when escorting swimmers. The boat has all the latest high-tech navigation equipment, and Reg, together with his brother, Ray, have escorted swimmers across the English Channel for more than 40 years, including many Channel Swimming Association record-breakers.

They are the most successful team to ‘Lead the Way’, in helping Channel-crossers succeed, and they are, usually, ‘right-on’ for picking the day, and time, to start a swim.

Since Sunday evening, Shane, Euan and Nick have been playing an anxious waiting game. Swimming the English Channel is, very much, a gamble, not least, in terms of trying to time the tides and weather exactly right, and they only have a small window of opportunity for their booking.

Reg is keeping a close eye on the latest Channel statistics – mainly, wind direction, force and speed, and wave height. When the trio get the go-ahead, they will leave London, with their support crew, at, approximately, 11pm, drive to Dover, be on the boat for 2:30am, and one of them will be in the water at 3:30am, in the pitch-black of night.

Shane is a former member of the Irish, Ulster and Leinster senior elite swimming squads, and an Irish and Ulster senior national long and short course swimming champion and record holder.

He was the Donegal Swimmer of the Year in 1995, 1999 and 2003. Shane was the Captain of Riversdale Otters Swimming Club in Strabane from 1996-1999, and went on to Captain both Glenalbyn and Trojan Swimming Clubs in Dublin.

Since 2010, Shane has been a swimming coach with Ful-On Tri triathlon club in London, and is a qualified British Triathlon Federation Triathlon Coach.

This isn’t Shane’s first time to undertake charity work through sport. As Captain of Trojan Swimming Club in Dublin, Shane organised, and participated in, a 24-hour ‘swimathon’, which raised €17,500 for the GOAL Tsunami Appeal of 2004, and, in 2012, as Vice-Chairman of St. Joseph’s GAA Club in London, Shane organised, and participated in, a five-day charity cycle from London to Mayo, which raised €15,000.

Donations can be made via the fundraising page – https://www.justgiving.com/fundraising/fot-englishchannelrelay – and, they will be most appreciated.

You will be able to follow the swim, via live tracking, here: