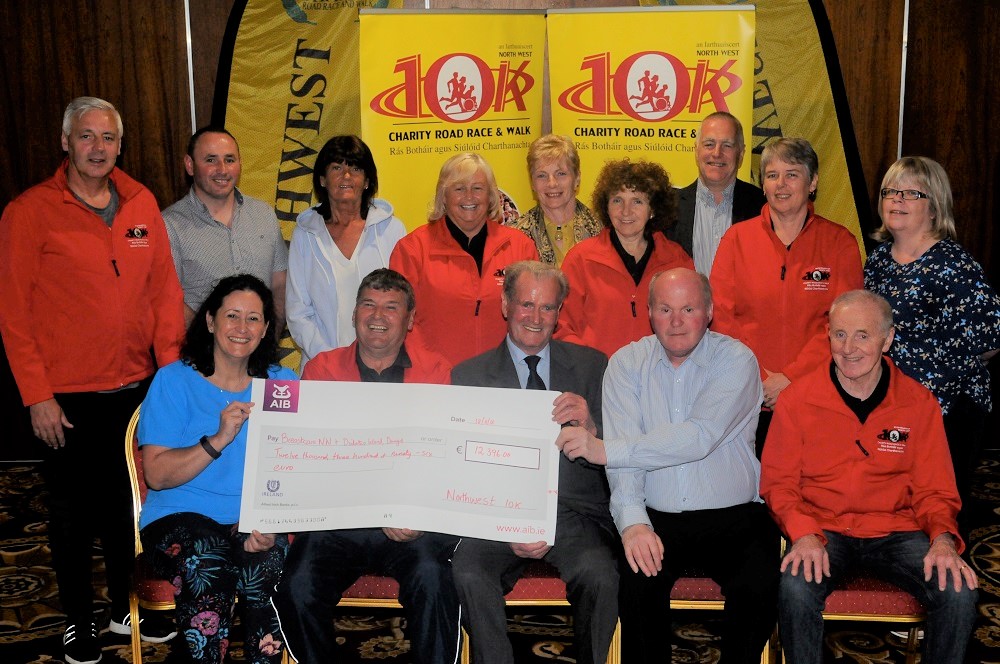 The grand fundraising total of the 22nd North West 10k has been revealed as €12,396 was presented to two local charities – Breastcare Northwest and the Diabetes Ireland Donegal Branch.

The announcement was made by Chairperson Neil Martin at a presentation function in the Mount Errigal Hotel last night. The two charities who will get €6,198 each, expressed their delight at the amount raised with the support of the 10k committee.

Mr Martin said Breastcare Centre North West and the Diabetes Ireland Donegal Branch had worked very well together on a range of fundraising initiatives in the lead up to the race and walk which took place on the May Bank Holiday Sunday in Letterkenny. He also thanked the Gardai under the direction of Sergeant Eunan Walsh for their support and the 57 stewards led by Neily McDaid who helped marshal the charity event which attracted an entry of just under 1,300 runners and walkers.

“Jimmy Harte was our special guest to start the event and we were delighted to have him there as he always was a supporter of the 10k. Martin O’Donnell was in charge of our traffic management plan this year and he did a really good job for us. We are well over 750,000 euros now from the 22 years and all that money has gone to charities in Donegal” Mr Martin said.

It was also confirmed on Monday evening that the 23rd North West 10k will take place on Sunday the 5th of May next year.

The new Mayor of the Letterkenny Municipal District Cllr Ian McGarvey congratulated all involved with the North West 10k who had helped raised essential funds for so many local charities over the past 22 years. “Without the effort of you all there would be no event. People care and want to assist others and as Mayor I want acknowledge what you are doing tonight in making this contribution to the two charities” Mayor McGarvey said.

Vanessa Savva, representing Breast Centre Northwest said the money raised would help with the funding of six mainly local medical students doing research work over the summer and for specialist nurse Alison Johnston who is doing a project to achieve better outcomes for male and female patients.

Ms Savva said: “We greatly appreciate this money and a big thanks to the North West 10k for that. We worked very well with the Diabetes group. This funding will make a big difference to what we are doing in the Breast Centre.”

On behalf of the Diabetes Ireland Donegal Branch, Caroline Baird said she first of all wanted to acknowledge the invitation from the North West 10k committee to be one of the benefiting charities from this year’s event. “We made a great team with Breast Care. It was a lot of fun too. It was an experience as well as an opportunity to raise money. We got to know the amount of dedication, time, effort that is involved. Our own committee did so much from the ideas for fundraising to going out and selling the tickets and helping with the dance.”

Diabetes Donegal will use the proceeds towards education in the community of children, parents and those with the condition. “The incidence of diabetes is higher in Donegal than in the rest of Ireland. The age is getting younger. A child was diagnosed recently at just 13 months and there was also a baby of seven weeks diagnosed. Expertise is needed at that age to manage the condition. My son was diagnosed 12 years ago. Then it was more straightforward with three injections a day. Now the new regime is more complicated” Ms Baird said.