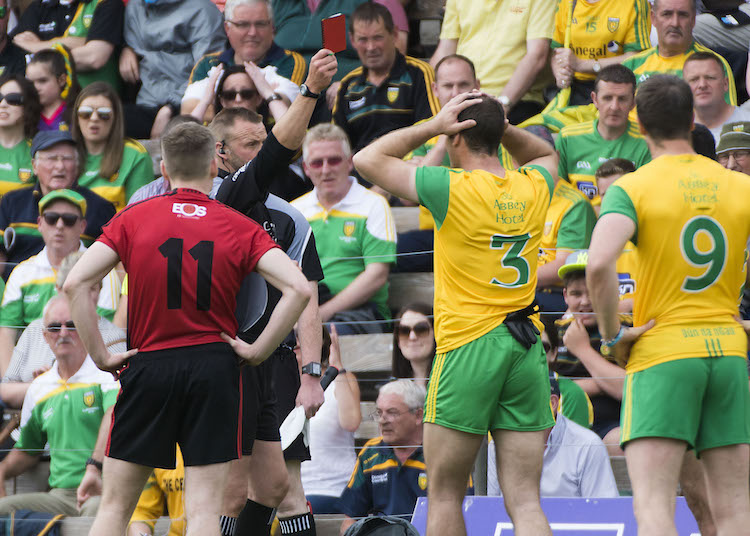 Declan Bonner has backed Donegal to cope with the absence of full-back Neil McGee in Sunday’s Ulster final against Fermanagh.

McGee was sent off early in Donegal’s semi-final win over Down. Donegal appeal to the Central Hearings Committee, but failed in their bid to clear McGee for the final at a hearing on Thursday night in Croke Park.

Donegal declined to go down the road of taking their case to the Central Appeals Committee .

“We didn’t want to prolong it,” Bonner said.

“We could have taken it a step further, but we just wanted to get it cleared up.”

The 32-year-old is one of Donegal’s main cogs. In 2016, a red card against Fermanagh meant that he missed a Championship game for the first time in 11 years, ending a run of 51 consecutive Championship appearances.

Bonner said of the three-time All-Star winner: “It’s a big loss to be missing such an experienced player.

“Personally, I thought he didn’t deserve a straight red. A second yellow, fair enough maybe, but I don’t think it was a red card.

“Unfortunately the appeal was turned down so we knew that we wouldn’t have him.

“He’s been there and done that, but he’ll lend his experience to whoever will come in.”

Caolan Ward and Stephen McMenamin appear to be the front runners to line out at full-back on Sunday.

Bonner, though, is playing his cards close to his chest.

The Donegal manager said: “That’s what the squad is about, lads getting an opportunity. We have had a look at what’s going on in training. Whoever comes in will do a job.

“Whoever comes in will be okay. We have a lot of defensive cover in the group.”

Donegal will still be without Martin McElhinney, Martin O’Reilly and Nathan Mullins, none of whom have featured yet in the 2018 Championship.

Otherwise, Donegal are in good health, with Bonner confirming that Kieran Gillespie has resumed training on he pitch again, but ‘still has a bit to go’ before he regains full fitness.