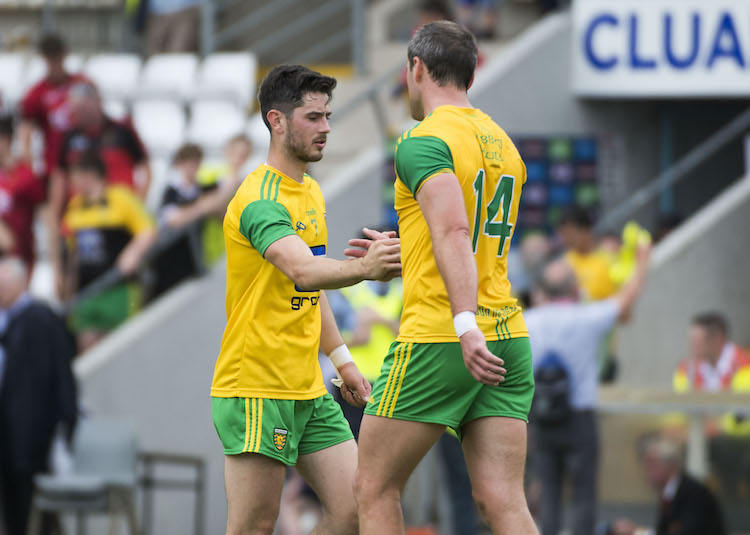 The Donegal manager, Declan Bonner, has called on referees to take stronger action on what he sees as excessive ‘targeting’ of Ryan McHugh.

Bonner is concerned at the high-rate of fouling on the Kilcar man.

In the Ulster semi-final against Down, Ronan Millar, Shay Millar and David McKibben were all black-carded for fouls on McHugh.

In this year’s League, the 2014 Young Player of the Year shipped particularly heavy blows in the games against Kildare and Tyrone.

“He doesn’t get enough protection,” Bonner said ahead of Sunday’s Ulster final against Fermanagh.

“He is targeted in every match. For some reason or another he targeted. It’s been there in all of our games.

“For some reason, the officials don’t pick up on it. He’s targeted all the time and it needs to be looked at, that’s the bottom line.

“We picked up seven or eight issues in the semi-final that weren’t addressed with at the time.

“He’s not the biggest in the world and he’s got a light frame and comes in for a lot of treatment. He’s brave to the extreme.”

Bonner believes his own team’s discipline is good. Asked if Donegal’s relative inexperience in certain areas could lead to indiscipline, Bonner said: “All those things are talked about. It’s a huge day for all of these guys.

“There is a real hunger and desire. Our discipline is good. These issues come up in every game.

“We had the unfortunate red card for Nathan in Kerry and the red card for Neil the last day, but that’s the only two sendings off that we’ve had this year.”