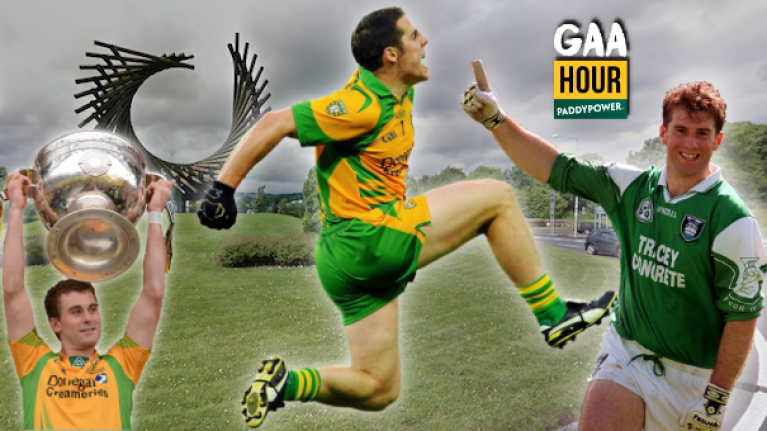 The GAA hour came to the Orchard Inn, Letterkenny last night for the shows first tour of the season.

Devenney and Cassidy both reminisced of their footballing days for Donegal in the early 2000’s with the party lifestyle of those times also revealed.

The pair created a lot of laughter for the crowd with some humorous and bizarre stories showing how much the game has changed.

After losing one particular Ulster-final, Devenney spoke of the pints of Red Bull that were being consumed on the bus home. Before telling that an unnamed player, who was completely naked walked do the front of the bus and asked then manager Brian McEniff, “Where did it all go wrong today Brian?”

Cassidy then had his tale to tell about the following day when the group were meant to meet up for a recovery session. After a long night in Donegal Town Cassidy and Devenney woke up still intoxicated from the night before knowing that there was a recovery training session that evening that they had to attend.

Both decided to head to a shop in the town for a change of clothing with Devenney coming out as Batman and Cassidy as Tweety Bird.

Having ordered a taxi to training Devenney described the driver that arrived as being paralytic and unable to take them to the venue. So it was up to Devenney himself to get them there on the taxi.

Cassidy went on to joke. ”No wonder we didn’t win an Ulster title back then.”

The Gaoth Dobhair man also opened up on his relationship with Jim McGuinness saying that he felt a little bit awkward around Jim at the time he was forced to leave the Donegal panel.

Cassidy did go on to admit that McGuinness transformed the game of Gaelic football in this county. Adding that he did have the opportunity to go back to the panel after the whole book issue but that he felt that too many bridges had been burnt by that stage.

Devenney also commended the efforts of McGuinness but added that he no longer had the same relationship with him as he did whilst he was a player.

“He seen the light of Jesus and I’m still fighting the devil,” Devenney admitted.

Eamon McGee was one of the guests for the second half of the show and he gave more of a tactical insight into the game. He spoke of how the loss of his brother Neil to the Donegal backline could hurt them on Sunday.

“He’s a big loss definitely if Rory decides to play the two Quigley’s up front.”

McGee also suggested that Rory Gallagher may not put much emphasis on Fermanagh kick-outs and could just elect to go down the middle with the majority of restarts.

He questioned the impact of Rory Gallagher knowing this whole crop of Donegal players warning Fermanagh that these players will also know his style of play very well.