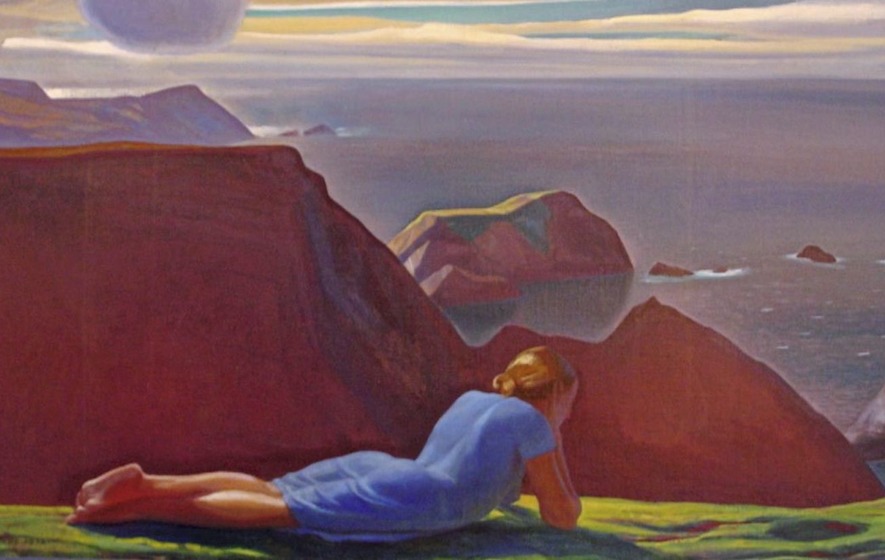 The Donegal painting which led BBC reporter on an amazing adventure

A BBC reporter has spoken of his amazing adventure sparked by a painting in Co Donegal.

The famous painting of “ordinary” Donegal girl Annie McGinley led journalist Kevin Magee on an investigation like no other.

The hard-hitting reporter has recently been indulging his artistic side following a chance encounter with the painting he found hanging in a pub in Glencolmcille.

It wasn’t the original ‘Annie’ – that was traced to a family in New York – but the reproduction of the work by famous American artist Rockwell Kent that struck a chord and led to the making of Ar Lorg Annie – Searching For Annie – which goes out on BBC2 Northern Ireland this Sunday.

“The painting of Annie McGinley lying on the Donegal cliffs caught my eye and I was immediately hooked,” Magee told the Irish News. “I had been on a cycle ride across the county and stopped off at the pub.

“It made me want to find out more. At one time Kent was a household name in the United States, but very little was known about the time he spent working in the Donegal Gaeltacht and I wanted to change that and uncover his story.

“His Donegal paintings are spectacular and in the film they are brought to a local audience for the first time. When I started out I didn’t realise my search would bring me to galleries and private collections across the world.”

The reporter’s quest to uncover the “real Annie” led him from New York to St Petersburg and reveals a tale of political intrigue, a hint of romance and lifelong friendships as Kent – a controversial figure due to his socialist leanings in the anti-communist McCarthy era – quickly fell in love with rugged Donegal.

“It is a fascinating tale, with this famous artist arriving in Ireland in 1926 with his second wife and befriending and painting the locals as well as the landscape,” Magee explains. “He turned out 36 paintings in four months, while living in a converted cow shed belonging to sheep farmer Dan Ward.

“When we traced the original Annie McGinley to New York, we discovered the family had another painting in their possession, one of Annie’s father carrying a poteen still in the moonlight. They didn’t realise the connection – the paintings are worth about a million dollars between them.”

Ar Lorg Annie, a Macha Media production for BBC Gaeilge, was made with support from Northern Ireland Screen’s Irish Language Broadcast Fund; it airs at 10.15pm on BBC2 Northern Ireland on Sunday June 24.