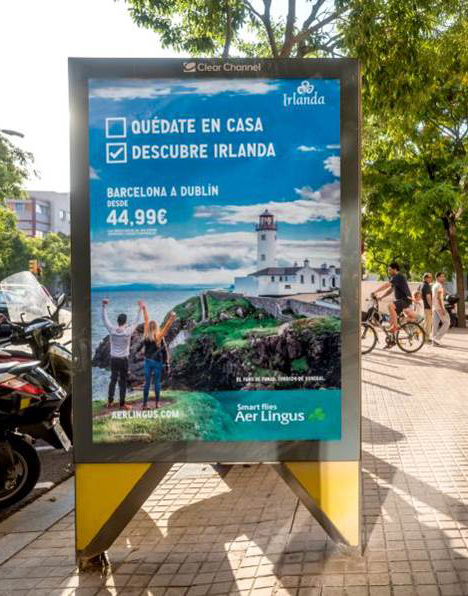 Around 2 million people in Barcelona are seeing eye-catching ads with Letterkenny couple Louisa Harley and Mark Forrester – featuring an image of Fanad Head – in bus shelters and at other outdoor locations around the city right now.

The campaign is being rolled out in Barcelona and Madrid this month to take advantage of late booking patterns among Spanish holidaymakers. Madrid and Barcelona are important markets for tourism from Spain, with around 35% of all Spanish visitors to Ireland coming from Madrid and around 28% from Barcelona.

As well as the outdoor ads, the campaign includes digital advertising on popular news, cultural and lifestyle sites, which will reach an estimated 5.4 million people living in both Madrid and Barcelona.

Spain is an important market for tourism to the island of Ireland and travel by Spaniards to Ireland has grown significantly over the past 17 years – going from just 90,000 Spanish visitors in 2000 to a record 443,200 in 2017. Tourism Ireland is determined to ensure that growth continues and is rolling out a busy programme of promotions right throughout 2018.

Barbara Wood, Tourism Ireland’s Manager in Spain, said: “2017 was the best year ever for Spanish visitor numbers to Ireland.

“We have an extensive programme of activity under way throughout 2018, to build on this success.

“Working closely with airlines and airports to build demand for flights is a key priority for Tourism Ireland, so campaigns with key partners like Aer Lingus are an important element of that programme.”