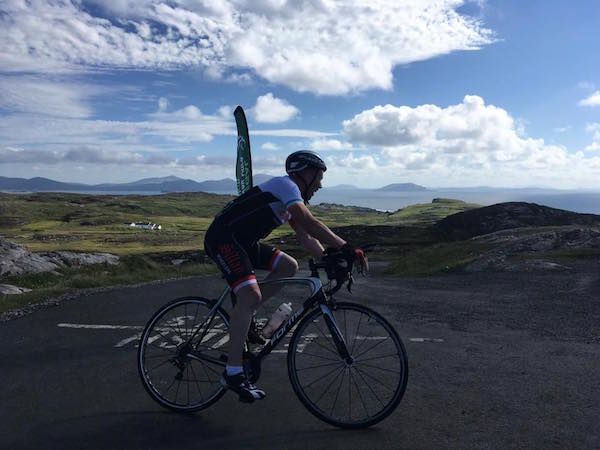 Spanish-based cyclist, Cormac Kenney, caused something of a sensation on Saturday morning when he smashed the record for the Donegal Ultra 555k Cycle by 37 minutes when posting a time of 18 hours and 42 minutes.

It was a weekend which saw a total of five new records being set in what was the third staging of the hugely appealing event.

The first record of the day was recorded just before six o’clock on Saturday morning when London biker, Melaine Wasley, raised the bar in a major way in the woman’s solo section when completing the course in 21 hours and 50 minutes, thus slicing almost four and a half hours off the previous record of 26 hours and 11 minutes set in 2016 set by Christina McKenzie.

The other new records came in the two-person section, where the pair of Rory Devlin and Damien Lagan crossed the finish line in 17 hours and 27 minutes; in the four-person section where AAA clocked 17 minutes and 2 minutes and in the four-woman team category in which the Galway Baybes clocked 19 hours and 24 minutes. A new eight-person team record was also notched up by Two Square Wheels.

Cormac Keeney is a native of Letterkenny and had been regarded as one of the leading contenders to win the 555 title, given that two time winner, Ronan McLaughlin, was not going to be among the record entry this time around.

Keeney gave a superb performance on his tried and trusted road bike and made things look so effortless throughout. And when he moved ahead of Stephen Harkens after checkpoint seven around the half way point in Dunfanaghy – the pair were actually running to the exact second for a time around the Fanad peninsula – the winner was never in doubt. The record-breaking rider was strong and steady throughout and cut a cool and controlled figure as he pedaled his way to a superb time.

The near-perfect racing conditions were certainly a factor in the fast times – high temperatures, no wind and not a drop of rain combined to make it a weekend to remember for most involved in the Ultra 555.

Speaking after setting the record for the fastest solo rider to tackle the recently established challenge, Cormac Kenney said it had been the toughest challenge he’d ever undertaken.

“I’ll never do anything like that again,” a visibly exhausted rider commented on
the finish ramp, minutes after finishing the race.

“For the first four hours I think I pushed too hard and when I came back into Letterkenny I was in a very bad place physiologically and the legs weren’t good. As I went into Fanad, I tried to come around. By the time I got to Horn Head I was feeling fantastic. Then I picked up a few punctures which was unfortunate. Thankfully the boys got them sorted and I got back on the road again,” he said.

“There were peaks and troughs in there. When I was coming out of Killybegs, all I could think of was getting to Donegal Town. Then Ballybofey, Ballybofey,
Ballybofey, Stranorlar and then Letterkenny,” he added.

Cormac revealed that he was getting things so tight that he came close to stepping off the bike in Letterkenny en route to Ramelton, having completed the Inishowen section.

“I was in a bad place. If I didn’t have Charlie Gallagher from Errigal CC, things might have unfolded differently. The crew is vital and the effort the put in is just as great as mine. Without the efforts of the guys who assisted me so well, I wouldn’t be here. It would just be impossible,” he said.

The 2018 Donegal Atlantic Way Ultra 555 will be remembered by many people for so many things. While those at the head of the field spun themselves into the record books in style, there were others whose challenge lasted much longer struggled to survive.

Bridget Friel was the last of the riders to run the finish ramp in Letterkenny at around 8.30 – 36 and a half hours after she took the starter’s flag at the very same point. Her joy was unbridled as family and friends lined the run in to cheer her home.

Her achievement was just as impressive and rewarding as those who’d blazed trails long before.