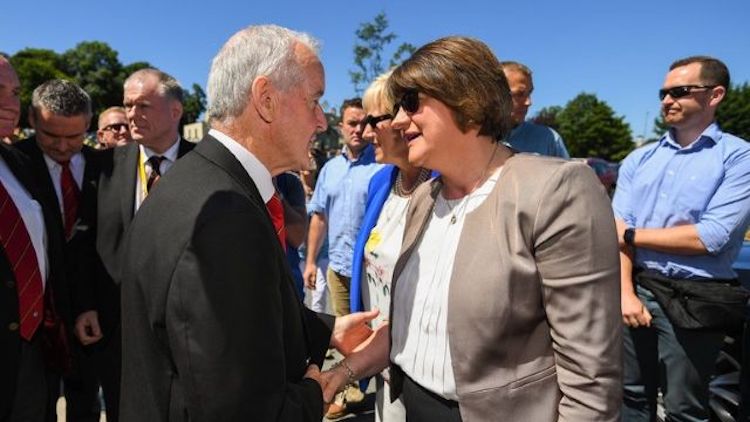 History was made at St Tiernach’s Park today when DUP leader Arlene Foster attended the Ulster final between Donegal and Fermanagh.

Mrs Foster, who is from Enniskillen, became the first DUP leader to attend an Ulster final.

She had met with Fermanagh manager Rory Gallagher and the team last week ahead of the final, having tweeted her congratulations after the semi-final win over Monaghan, sparking speculation of her attendance.

At around 1.40pm, twenty minutes before the throw-in, a media scrum surrounded the main gates at Clones, where Mrs Foster arrived to be greeted by Ulster Council President Michael Hasson and Fine Gael TD Heather Humphries.

“I do realise that there might be some people who may be uncomfortable, with me being here on a Sunday but let me say this, I am a leader of a political party that promotes a shared society in Northern Ireland and to do that you have to take steps,” she said before taking her seat.

She shook hands with Sinn Féin’s Stormont leader Michelle O’Neill, who was sitting just behind her, but there was no joy as her native Fermanagh lost 2-18 to 0-12 to Donegal.

In 2008, Edwin Poots – then the Northern Ireland Sports Minister – became the first DUP politician to attend a GAA match when he attended the McKenna Cup game between Donegal and Down at Pairc Esler in Newry.

In 2012, Foster’s predecessor as DUP lead, Peter Robinson, attended the Dr McKenna Cup final between Derry and Tyrone at the Athletic Grounds.