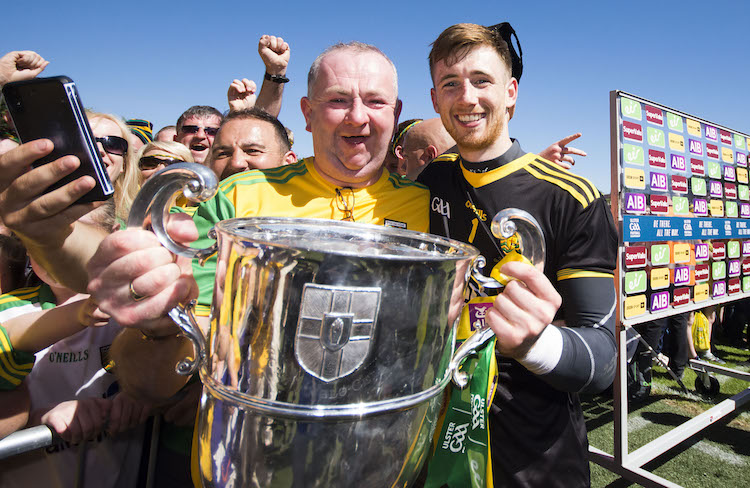 Shaun Patton often watched and wondered what the Ulster final stage would feel like, never thinking he’d get his big moment.

The Letterkenny man had played just two GAA games in recent memory when he agreed to join Declan Bonner’s Donegal panel in December.

His League of Ireland soccer career came to an end after being coaxed in by Bonner, who immediately made it clear Patton wasn’t being brought in just to fill a spot.

But, yesterday, Patton kept a clean sheet as Donegal overcame Fermanagh in the Ulster final.

“That’s the best feeling I’ve had in my entire life,” the 22-year-old beamed.

“It’s absolutely unbelievable. Hopefully this is only the start of the season and we can kick on from this.

“It’s something that crossed my mind a few times, about what a place this would be to be in.

“Playing along with these seasoned boys who have won it is just unbelievable. This is my first and I hope it’s not my last.”

Spells at League of Ireland sides like Finn Harps, Derry City and Sligo Rovers seemed to have turned Patton’s career in a different direction.

But having left Sligo at the end of 2017 – and despite Harps and Premier Division champions Cork City knocking upon his door – Patton, impressed by Bonner’s blueprint, decided to go down the GAA route.

He’d played for St Eunan’s against Roslea and Omagh in the Ulster Club Championship of 2014, but Bonner backed his man to step up – and his belief has been vindicated.

Patton said: “There were eyebrows raised in the background, but I didn’t pay too much attention to all of that.

“One thing I always do is work as hard as I possibly can to do as well as I can. I have to thank Declan for sticking with me and giving me the opportunity. This isn’t easy got.

“I never felt pressure. The way the team is set up, no-one is put under pressure. We back the group to get the job done and it’s a group thing whatever we do. It’s not single men and the group is fantastic.”

Patton’s Championship displays went to such a level that they were even beginning to draw comparisons with 2012 All-Ireland winning stopper Paul Durcan.

A clean sheet at St Tiernach’s Park yesterday just added to the feeling, but Patton admits he had fortune on his side.

He said: “They started bombarding me, but my boys protected me. The defenders were absolutely outstanding for me today. I got away luckily with one that came off the crossbar. I lost it in the sun. God was on my side, he helped me out there!”