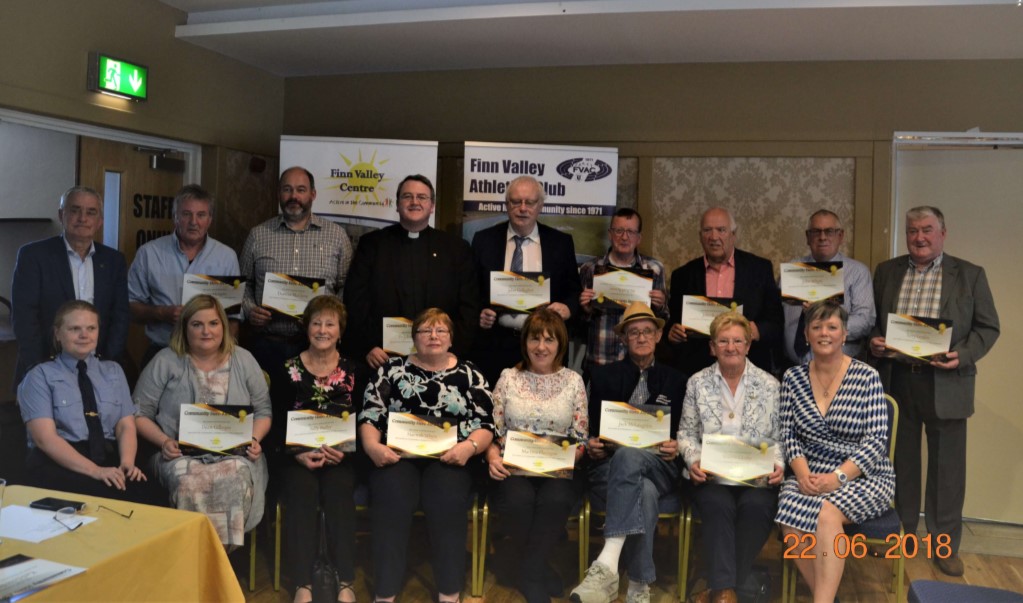 An evening was held in the Finn Valley Centre, Stranorlar last Friday the 22nd of June to celebrate the work of this year’s Community Heroes.

The evening began with and address by Monica Ramsey, Finn Valley Centre Marketing Officer in which she talked about what makes a community hero, citing the qualities that all community heroes possess, of determination and tenacity or as she put it “stickability factor” a quality that allows them to endure the many knock backs that they receive and yet, continue doing such great work.

She stated that the ability to keep on going, even when the going gets tough is what makes them community heroes and their work is a testament to that fact.

The evening continued with an address by Patsy McGonagle, Chairperson Finn Valley Centre and Finn Valley AC who spoke of how the community has changed and continues to change.

He spoke of how vital it was to have a strong community sector to support new people coming to the area from other countries and how, in many ways they were the Irish of the 40’s and 50’s who travelled across to the U.K. and America.

He alluded to the large gathering of business, community and statutory organisations who assembled the previous week as part of the annual Health and Wellbeing event which was organised by the Finn Valley Community Health Forum in conjunction with Finn Valley Centre and how that event supported and promoted all aspects of community.

A presentation of a certificate was made by Patsy McGonagle to each recipient to mark and acknowledge their achievements.

After the presentations a final address was given by An Garda Siochana Community Liaison, Garda Brenda Healey who spoke about the great community in the Finn Valley area and how people working in the community help the work of the Garda by helping children strive for goals and by giving those in the community who are lonely a place to go and people to talk to. She finished by thanking and congratulating all those being awarded for their great work.

After the presentations refreshments were served and those in attendance had an opportunity to relax and chat with all gathered.

Awardees on the night were awarded with a certificate for their outstanding contribution to their community as follows:

John & Hanna Whyte – Provision of a Drop in Centre and Friday Morning Sessions and supporting local schools, organisations and international organisations through the All Seasons Charity Shop

John & Sally Butler – C.A.K.E. Centre Killygordon, Development of the Community Enterprise and Sports Centre, provision of Christmas Day and St Patrick’s Day dinners for the elderly in the community, The Wednesday Club Killygordon.

Jack McLaughlin – A special mention was also made for the work of Jack McLaughin, Lifford who has supported Mamie Clarke on many of her fundraising initiatives and helps her out at McElhinneys were both can be seen raising funds for Breast Cancer. Jack was also presented with a certificate at the event.

Martin Flanagan – Member of the 6th Donegal Stranorlar Scouts for past 20 years, Group Leader since 2005, involved in Strategy Development Team for Scouting Ireland, Member of Irish delegation to Sweeden and has let Scout groups to camps in Holland, Scotland Copenhagen. 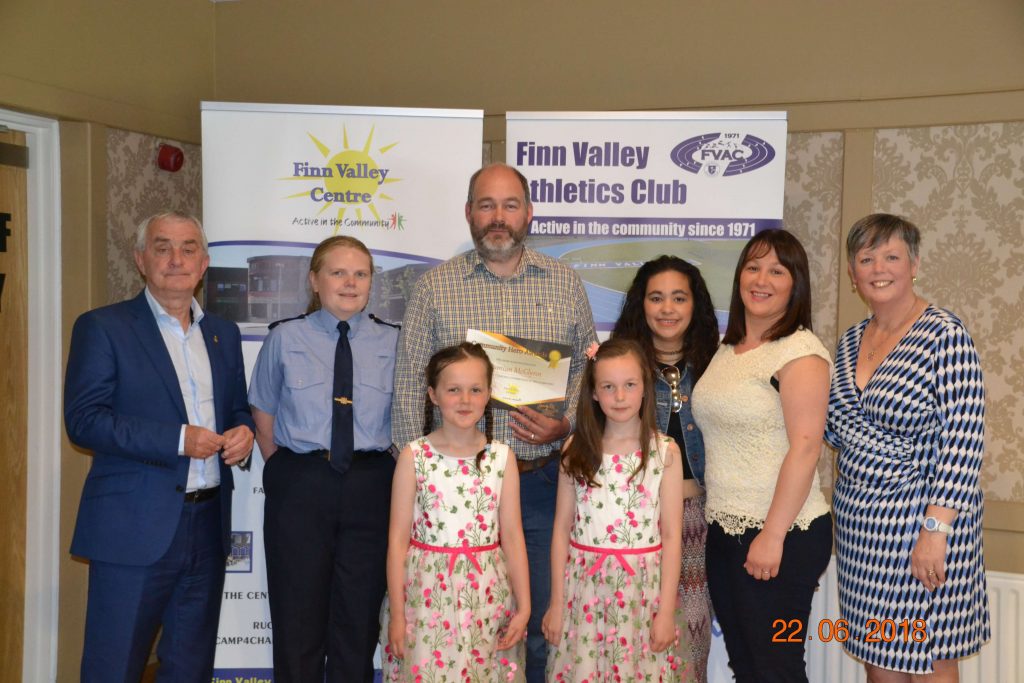 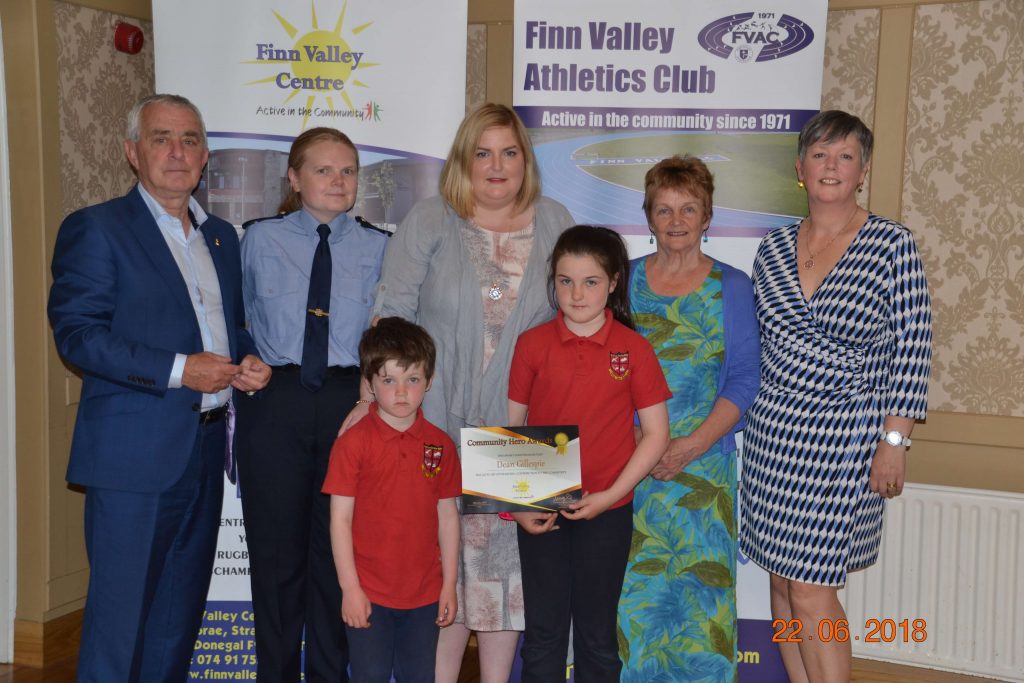 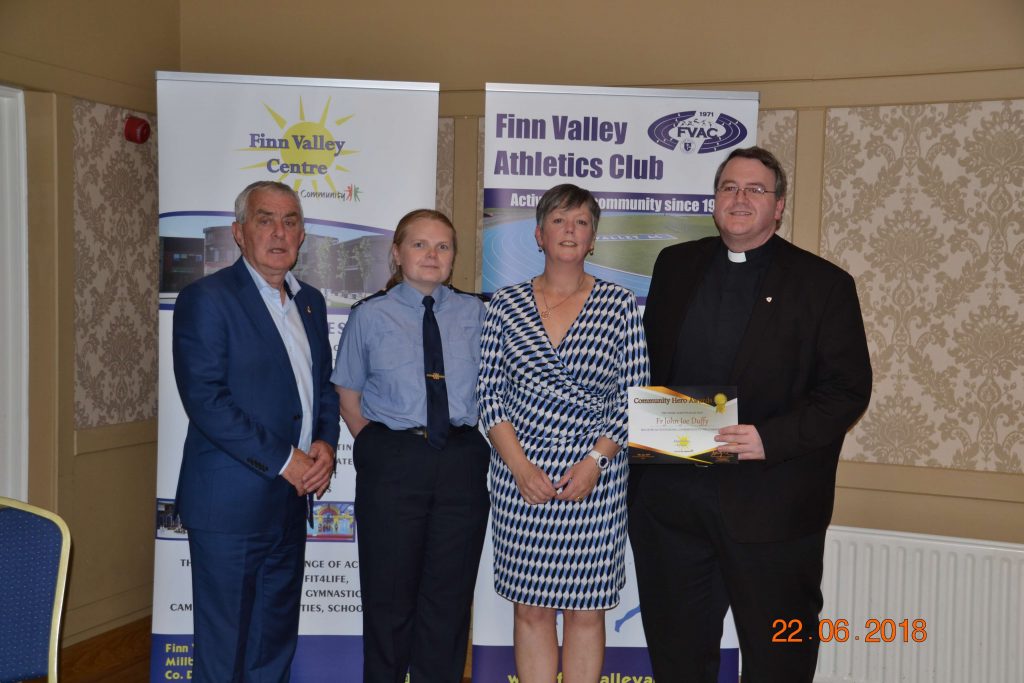 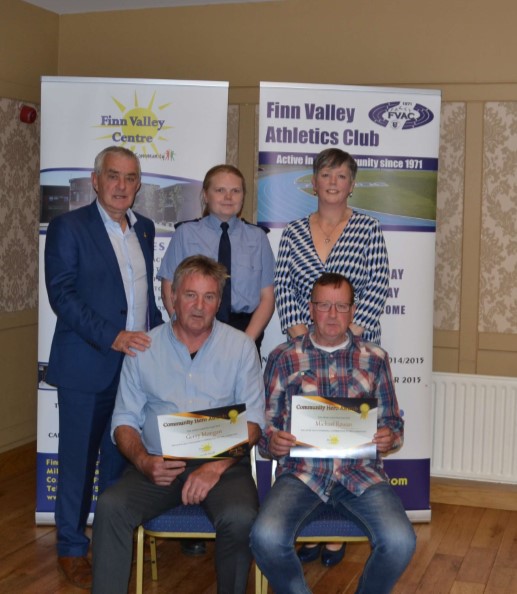 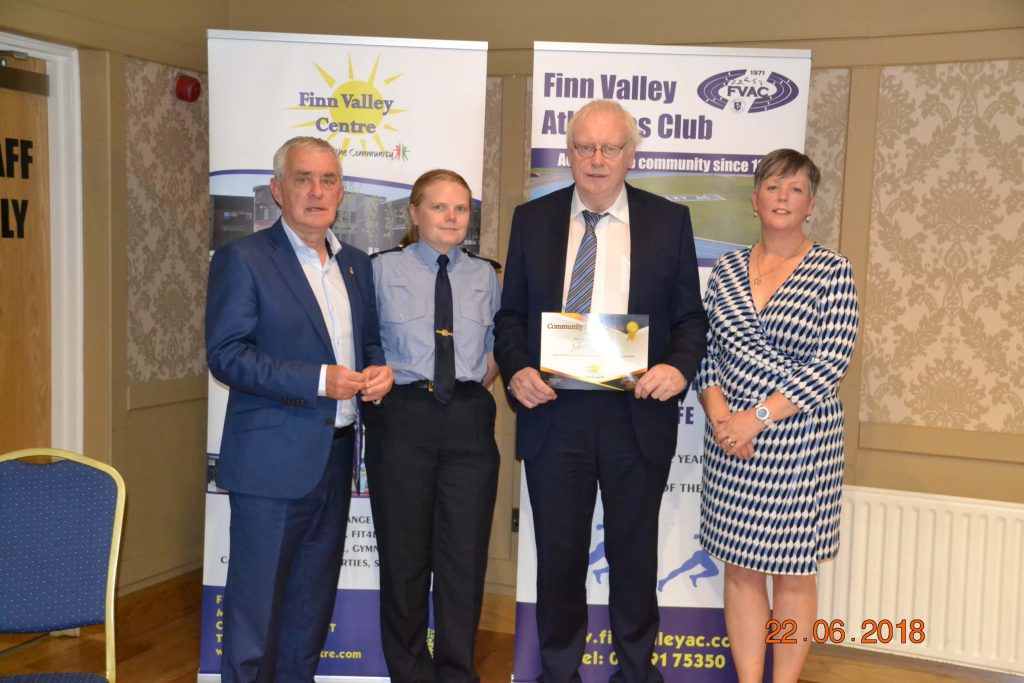 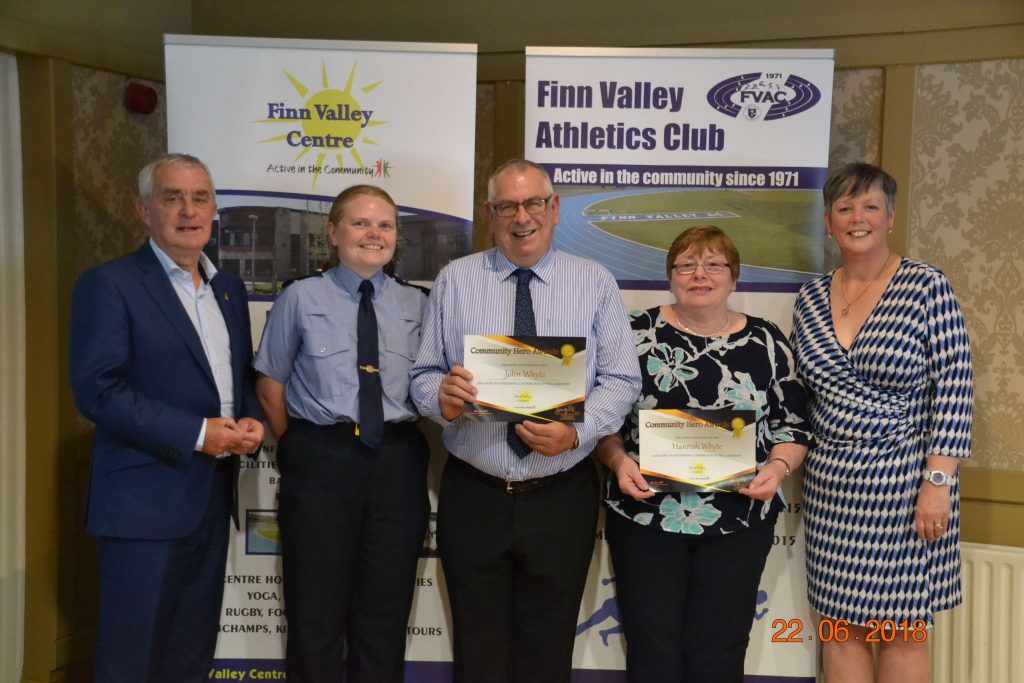 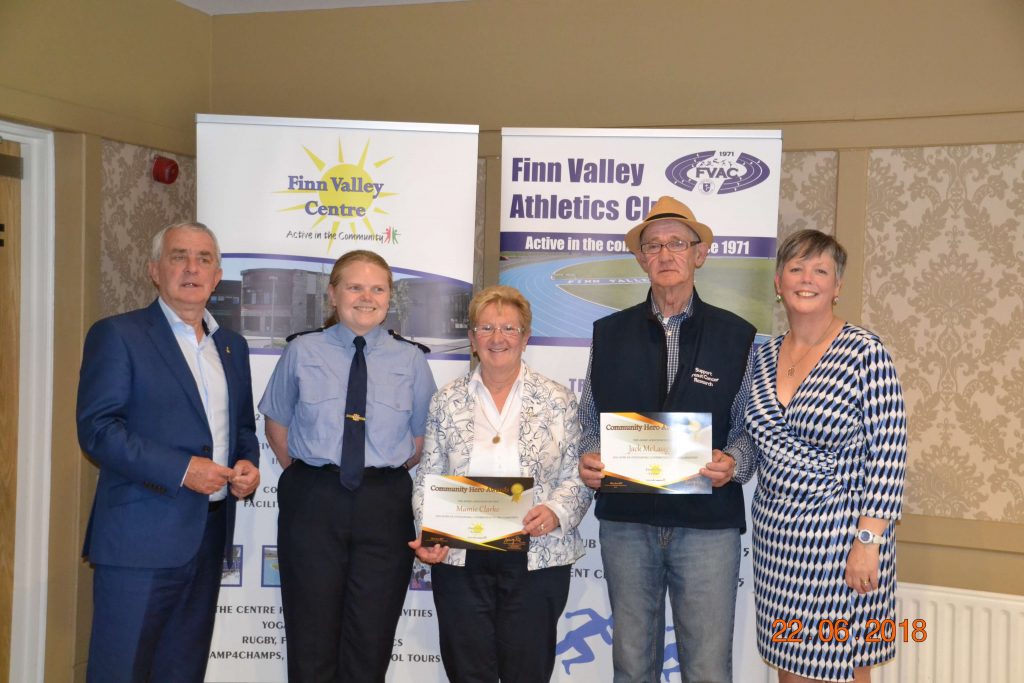 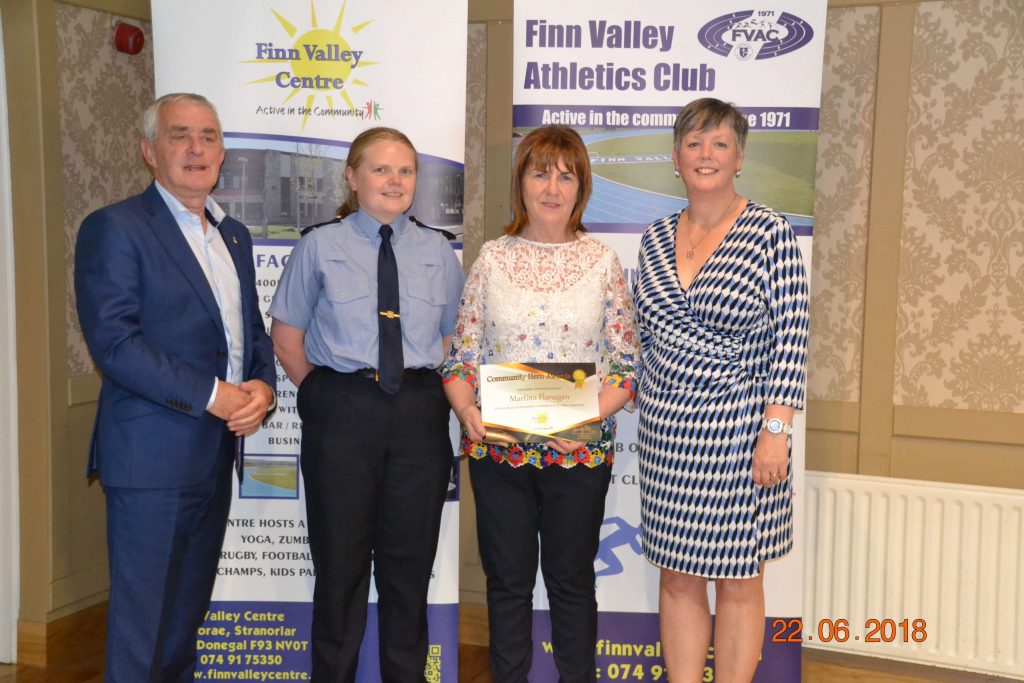 Heroes one and all at the Finn Valley Centre’s Community Hero Awards – Pic Special was last modified: June 29th, 2018 by Stephen Maguire