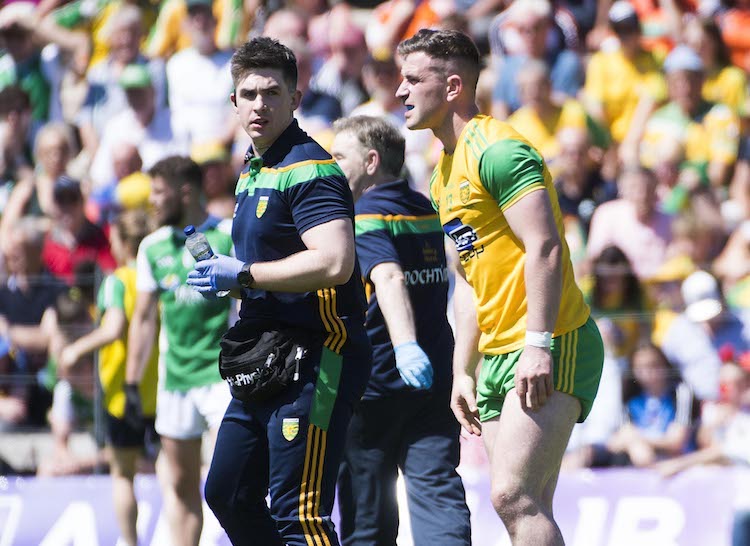 Past and current footballers were among those to Tweet their support to injured Donegal star Patrick McBrearty.

The Kilcar man was confirmed to have ruptured the anterior cruciate ligament in his left knee and faces up to a year out of action.

McBrearty sustained the injury in Sunday’s Ulster final win over Fermanagh in Clones.

Declan Bonner, the Donegal manager, has backed the 24-year-old to bounce back, but admitted the injury represents a ‘cruel blow’ to both the player and team.

Horrible news on @PaddyMcBrearty
Cruel injury & cruel timing for a man at the peak of his sport.

Huge loss to @officialdonegal Very disappointing for McBrearty himself. An awful loss for football fans everywhere. He was flying!!! https://t.co/uvPufm5IO5

What a loss Paddy McBrearty will be to the championship. Such a fine fine player.

That news about Paddy McBrearty has ruined my whole week. Gutted for the lad. Was looking forward to him doing his stuff against Dublin. Impossible to replace that scoring threat #gaa

Paddy McBrearty will be a huge loss for @officialdonegal look what he's contributed to the team already. Wishing him a speedy recovery #ClassAct

What a loss Paddy McBrearty will be to the championship. Such a fine fine player.

Awful news for Donegal & Paddy McBrearty. He has been the outstanding player of 2018 if you include league and championship.

Gutted for Patrick McBrearty. Not only a big loss to us in Donegal but a huge loss to the Championship as a spectacle with the form he was in. Speedy recovery Paddy 💪 #donegalgaa #GAA https://t.co/X9W5AkTzIa