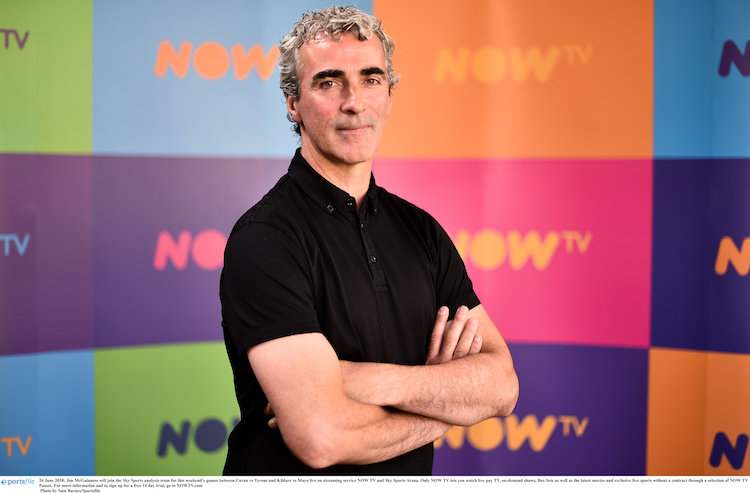 Jim McGuinness has called on Dublin to ‘do the right thing’ – and ask that two of their ‘Super 8’ group games be played out of Croke Park.

Dublin will host Donegal in the opening quarter-final group clash next month and the Dubs will have another fixture at Croke Park.

Picture caption: Jim McGuinness will join the Sky Sports analysis team for this weekend’s games between Cavan vs Tyrone and Kildare vs Mayo live on streaming service NOW TV and Sky Sports Arena. Only NOW TV lets you watch live pay TV, on-demand shows, Box Sets as well as the latest movies and exclusive live sports without a contract through a selection of NOW TV Passes. For more information and to sign up for a free 14 day trial, go to NOWTV.com Picture by Sam Barnes/Sportsfile

All counties are guaranteed one home and one away game in the Super 8s, with the other game being played at Croke Park.

However, with Croke Park acting as Dublin’s home – the Dubs have played all their Championship games at the venue since 2004 – McGuinness says they should ‘do the right thing’ with their ‘legacy’ in mind.

“They’ve got the biggest population, they’ve got the most money and all these things so it’s an opportunity to rise above that and go to a neutral venue and do what they do anyway and that’s win almost every single game,” former Donegal manager McGuinness said.

“I think it’s an opportunity for Dublin and for Croke Park to do the right thing and go the same as all the other teams.

Dublin won their eighth Leinster title in succession on Sunday and are gunning for a fourth Sam Maguire on the trot this summer.

The last team to get the better of Jim Gavin’s side was McGuinness’s Donegal in an All-Ireland semi-final in 2014.

McGuinness said: “I think if you look at it from everybody that isn’t from Dublin, all the other counties, and you think 2014 was the last time they were beat in the Championship, that was the last game they lost, so the chances of them losing two games in the Super 8s at home in a month when they haven’t lost two games in four years, it’s not realistic.

“So, the reality is, people from the outside looking in will go, ‘That’s a fix, that’s set up and Dublin’s going to progress again’ and there’s no question about that and I think that’s a fair enough comment as well. That if they have those two home games they’re probably going to win them based on the last four seasons.”