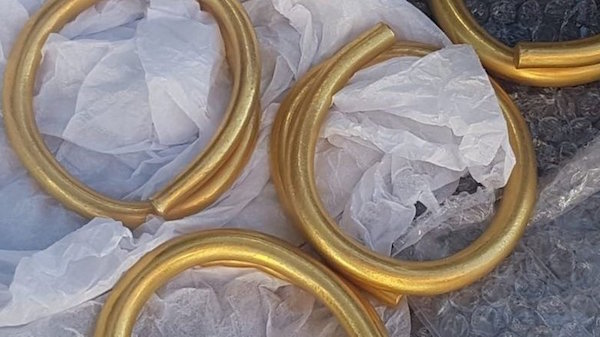 Donegal TD Joe McHugh has praised the finders of Bronze Age gold artefacts in the county.

The prehistoric discovery has been handed over to the National Museum of Ireland after the finders reported it to officials yesterday, Tuesday June 26.

“A discovery like this is so unique and precious. It is impossible to put a price on the value that it adds to our heritage,” Mr McHugh said.

“The finders deserve huge credit and thanks for their openness and for wanting to ensure that these unique artefacts are preserved for the benefit of others.

“This is the stuff of dreams and once again Donegal is being put on the map as one of the richest parts of the country for history and heritage.

“I look forward to seeing the gold on display and maybe one day it will return to Donegal to be exhibited in the county.”

“I understand experts from the National Museum travelled to the site where the artefacts were discovered and carried out a thorough investigation of the area for evidence of how and when the important artefacts were deposited.

“I would like to thank them for their work.

“It’s also important to note the work of staff at the Donegal County Museum for their assistance with this discovery.”

Following their discovery, the artefacts were immediately removed from the site and transferred to The National Museum of Ireland.

They will be put on display as soon as initial investigations are concluded.