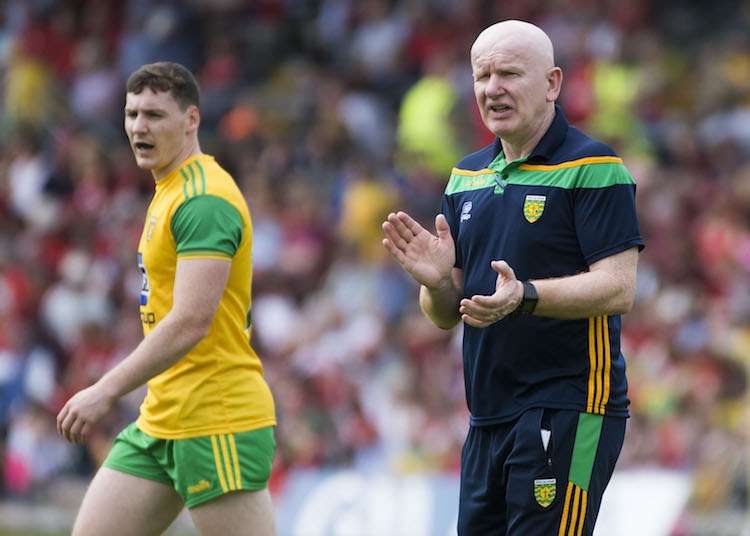 Declan Bonner says the Super 8s should give the provincial Championship winners a better reward.

Ulster Champions Donegal open their All-Ireland quarter-final group stage with a game against Leinster champions Dublin at Croke Park on the weekend of July 15.

While the meetings between provincial champions are to be played at neutral venues, Dublin will have home advantage for their joust with Donegal next month.

The Dubs will play two of their group games at Croke Park, while Donegal won’t have a game at Sean MacCumhaill Park until the August Bank Holiday weekend.

“Our first match is an away game against Dublin. Our second match is away and it’s the third game before we get a home game.

“That would have been a fair prize after winning Ulster.

“Dublin will have two games at home in Croke Park so, of course, that’s an unfair advantage.

“We never thought about the Super 8s. It was in the back of our minds, but the number one priority was to win an Ulster title. That was our direct route to the Super 8s, but beyond an Ulster final I hadn’t given the Super 8s much thought on their format or lay-out, but I think it would make sense to give the provincial winners their first game at home or even to give them two home games in the group.

“I don’t think it has been thought out too much.  It’s out of our control, but it’s disappointing.”

Bonner will be without ace forward Patrick McBrearty for the remainder of this year after it was confirmed that the Kilcar man had ruptured the anterior cruciate ligament in his left knee during Sunday’s Ulster final win over Fermanagh.

Donegal had 13 different scorers at the weekend and took their overall Ulster SFC tally to an impressive 8-76.

Bonner said: “We’re looking forward to the chance to play Dublin in Croke Park, make no mistake about that.  Everyone wants to play at Croke Park, of course they do, but we could have played one of the other games there.”

The absence of McBrearty represents a huge blow to Donegal ahead of the inaugural running of the Super 8s.

But Bonner believes his men will go to the headquarters armed with a belief that they can rattle Jim Gavin’s side. Dublin have won the last eight Leinster titles and are chasing a fourth Sam Maguire in a row.

Bonner said: “It’ll be a brilliant experience and we’re not going there to look around us. We went there in the League and had a right go at it.