An entrepreneur has slammed planners for rejecting his application for a hydro turbine plant near Ballyare Bridge outside Ramelton.

John McGovern said he is not prepared to stand aside and see €516,000 of his hard-earned savings wasted.

Mr McGovern, who resides at Riverside Cottage on the banks of the Lennon at Ballyare Bridge, has spoken to the Tirconail Tribune of his frustration with the country’s planning laws and the long-running saga that has cost him a fortune since he first published his blueprint to harness the Lennon for energy as far back as 2011.

Over these years he’s enlisted a team of specialists in the fields of ecology, architecture, water surveyors and the firm of Keys from Edenderry whose work and expertise lies in pearl musssels.

McGovern’s company known as River Cottage Hydro Ltd. And he says that the project has scored top marks with EU laws on the grounds of sustainable and fossil-free energy that is not only eco-friendly but it also has the ability to generate over 700,000 kilowatts of power using a modern Archimedes Screw Turbine system.

This system, says McGovern and his advisers is a world leader in every aspect of design and it creates no more noise than an average domestic dishwasher.

In 2011, he first sought what he assumed to be the most basic planning permission for the hydro turbine buried at the bottom of his own garden and producing an eco-friendly 700,000 kilowatts of electricity. 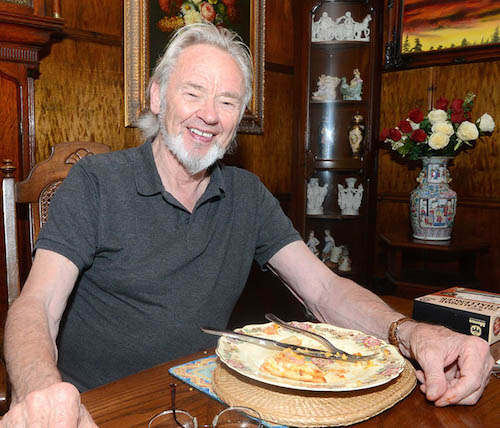 He also planned to restore the level of salmon spawning by introducing a stock of pearl mussels to maintain and improve the health and prolong the life cycle and freshwater life period of the wild Atlantic salmon. He also says that salmon will not spawn unless they detect the mussels in the river bed.

‘This aspect alone of my plan,’ he contends “will have the added bonus of restoring the pearl mussel population that is vital for salmon restocking of the Lennon. I intend to restock the Lennon with mussels because each one filters and purifies 25 gallons of water per hour and it has been scientifically researched and proven that this process creates the environment for salmon to lay their eggs. And if the salmon does not detect the presence of the mussels, the absorb the eggs and return to sea as baggots and the population cannot increase as a consequence,” he added.

Mr. McGovern points to the fact that as recently as fifty years ago there were 60,000 wild Atlantic Salmon coming up the Lennon to spawn.

“That is now in single figures while at the same time independent researchers and a team of four divers found only 17 mussels in a one mile stretch of the river a couple of years ago, he adds.

His company has rejected outright the Council planning Dept reasons for rejecting the application and refusing to process it any further.

The Council’s rejections are based on ecology: SAC: legal ownership of the weirss, flooding, noise and difficulties for fish attempting to access the turbine.

McGovern has rejected outright these issues saying that in all instances where objections were raised by officials he has been able to prove their advice has been totally contrary to his own team of experts.

John McGovern has a long established record in business. He originally lived in Cheshire and came to Donegal with his family to establish Trocal PVC windows in Fanad and in Derry, he told the Tribune this week of his frustrations at the overarching level of bureaucracy at official level that has continued to delay progress on his and other such projects that can benefit the economy and substantially to Ireland’s demand from the EU to reduce carbon emissions.
He explains that having spent over half a million Euros, he’s no further forward and cannot see why any delay arose in the first instance.

McGovern says the Archimedes Screw Turbine purchased to locate in the stream can be a huge success, noise free only raising sound levels by a single decibal at a distance of 250 metres from the source. But until the Council agrees to re-examine his proposals and bring in independent experts to assess the value and worth of the project everything remains stalled.

The turbine depends for generation on the volume of water and the blades turn at slow speeds that do not deter fish to swim through the system.

“All the Council has to do is to give permission to divert the old Millrace that comes into my back garden before turning right to the original derelict mill some 200 metres away. It then finds its way back into the river as it has done for a period of 318 years. There is no risk of flooding: my property is a non SAC area and there are no environmental downsides, no risks of any kind arise and I’m totally flabbergasted at the decision by Council planners not to process the planning application any further,” says Mr. McGovern.

He has been seeking permission from Donegal County Council ever since 2011 to run the Millrace down his garden: install the turbine where the water volume will deliver energy that will be sold into the national grid.

He says that full agreement with the energy suppliers is in place for a number of years.

Mr, McGovern said: “Insofar as water levels are concerned, there are two weirs: one of which is on my property and the second one also passes by and to which I have access if required. There are no legal issues whatever and these weirs have supported three mills in former times. My project will reduce global warming and my greatest wish is to see it through to completion.

“At the same time the Lennon remains a toxic river. It has been brought to my attention that in former times the Council had large waste tips close to the River Lennon and untreated sewage from Milford, Kilmacrennnan and Ramelton went into the river. I’ve read that in 2006 a report blamed the Council for the mussel decline in the river with the sewage treatment plant in Kilmacrennan being a significant cause’ of the mussel decline.

“Our company had the water quality of the river tested a couple of years ago by a highly reputable lab as the Lennon passed by my back garden. The tests found the water is toxic and unfit for salmon fry or pearl mussels. My project aims to remedy this problem.

“In former times the Lennon was reported to have had one of the largest pearl mussels catchments in Ireland. The river runs from Gartan Lough, through Lough Fern and beyond Ramelton into the Swilly Estuary. The Council announced back twelve years ago that they’d been successful in obtaining €2.3 million in EU funding for a further programme aimed at protecting the fresh water pearl mussel,” added John McGovern.