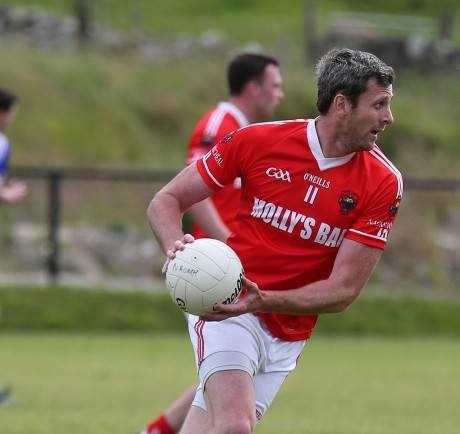 Previews of the ties in division one and the updated table

Following Donegal’s Ulster-final victory there will be a return to action for club football for the next few weeks.

Every team in the league has now reached the midway point of the season but there is still loads to play for at both ends of the table.

The top four are battling it out for the title whilst any of the bottom five could still get relegated. Glenswilly have found themselves a slight safety net in the middle of all this, but they too will still need a few more points on the board to ensure safety.

This Sunday they welcome Aodh Ruadh to Pairc Naomh Columba in a contest that could play a massive part in how either sides season pans out.

For Glenswilly a win would put them on twelve points which would put them in a very comfortable position with six games remaining. A loss though would bring Aodh Ruadh on to eight points and could put the Glen men right back into the relegation battle.

Aodh Ruadh showed fighting spirit to get a point in their last outing with Cloughaneely coming from four points down in the last five minutes of the game.

They currently sit in the relegation zone with Dungloe and will know that any points that they can earn now will be massive to their hopes of survival.

Dungloe make the short journey to Naomh Conaill on Sunday at the earlier throw-in time of one o’clock. Naomh Conaill strolled to an eighteen point victory over their close rivals on Tuesday night and will be favourites to win again this weekend.

Naomh Conaill are a single point off top position, but leaders Gaoth Dobhair have a game in hand. Dungloe’s solitary victory this season came against Aodh Ruadh and they are currently struggling to add to that.

Milford and Cloughaneely pair off in Pairc Naomh Fionan in a vitally important fixture at the bottom end of the table. A few weeks ago Milford earned victory against their rivals in a close battle. A win for either side would give them a jump on the other relegation candidates which is a big benefit at this stage of the season.

First play second as Gaoth Dobhair host St Eunan’s in what will be another huge clash in deciding who claims top spot in the league. This fixture has thrown up a few classics over the years and Sunday’s clash is expected to be no different.

Gaoth Dobhair had a massive six point victory over Kilcar last time out and you would have to feel that another win on Sunday would almost put one hand on the title.

Kilcar have the long journey to the Bridge as they face off with St Michael’s. The Towney suffered defeat in their last game and they will need to win this weekend to keep with the frontrunners.

St Michael’s on the other hand haven’t had a win in seven games and will be looking to try move their way up the table. 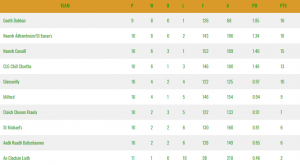 Previews of the ties in division one and the updated table was last modified: June 28th, 2018 by Stephen Maguire
Tags:
Division OnedonegalGAAStandings