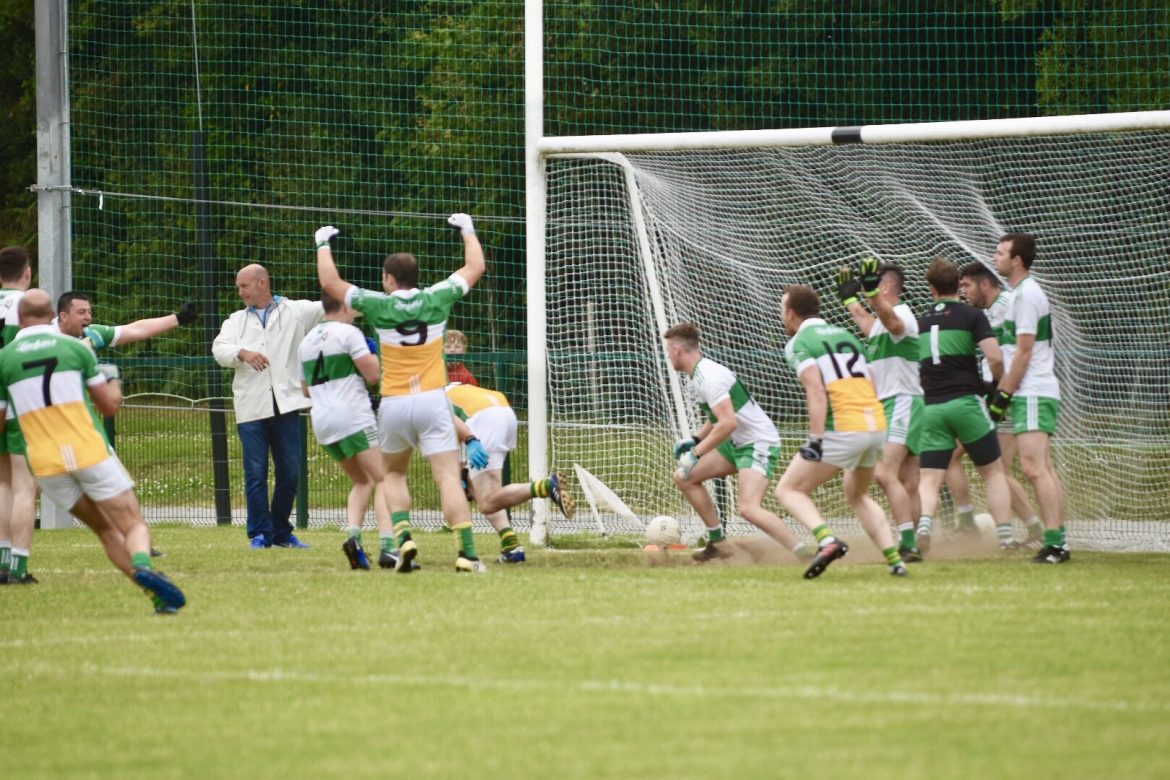 Ciaran Bonner bundles a point for Glenswilly against Aodh Ruadh

GLENSWILLY HAD Ciaran Bonner goal to thank for pinching a point with the last kick of the match against Aodh Ruadh this afternoon.

Bonner was on hand to stab home from close range in a crowded square following a ball lobbed into the square by Kealan McFadden.

Aodh Ruadh, though, will wonder how they didn’t manage to take the two points, having looked as though they had done enough to survive the Glenswilly fightback.

However, the experience shown by Brendan Walsh’s home side was perhaps what got them something when it looked at though they would get nothing.

Shane McGrath had lit up the first half with two fine goals to give Aodh Ruadh a 2-5 to 0-7 advantage at the interval.

His first goal on 11 minutes was an excellent individual effort, driving right at the heart of the Glenswilly defence before putting a blistering shot past James Gallagher.

Then, four minutes before the break, McGrath goaled again and this time it came following a neat one-two with Darren Drummond.

Glenswilly had goalkeeper Gallagher to thank for making a save from Damien Cleary as Aodh Ruadh were impressive in the first half.

With Neil Gallagher having been black-carded inside of 20 minutes for dissent after referee Mark Dorrian didn’t award what the hosts claimed was a free when Caolan Kelly shot at goal, it didn’t look good. Neil Gallagher has also protested that Kelly’s effort had gone over the bar.

However, the interval deficit was four point with Gary McFadden and Philip O’Donnell, in particular, keeping them in touch from placed balls.

Six minutes into the second half, Glenswilly managed a goal to reignite their fortunes. Brian Farrelly planted a ball in from deep and although O’Donnell went for a slap, there was no touch and it made its way past Peter Boyle.

It seemed as though the Aodh Ruadh conquest was waining but a third goal, this time on 37 minutes, put the away team back in front, 3-8 to 1-11. This time it was Philip Patton who broke into space and finished well from Colm Kelly’s throughball.

Johnny Gethins also got in but shot wide, David Dolan was inches wide when going for goal and Cleary was denied again by goalkeeper Gallagher.

That kept Glenswilly alive and they made the most of it when Bonner managed to get the draw in the fourth minute of injury time.