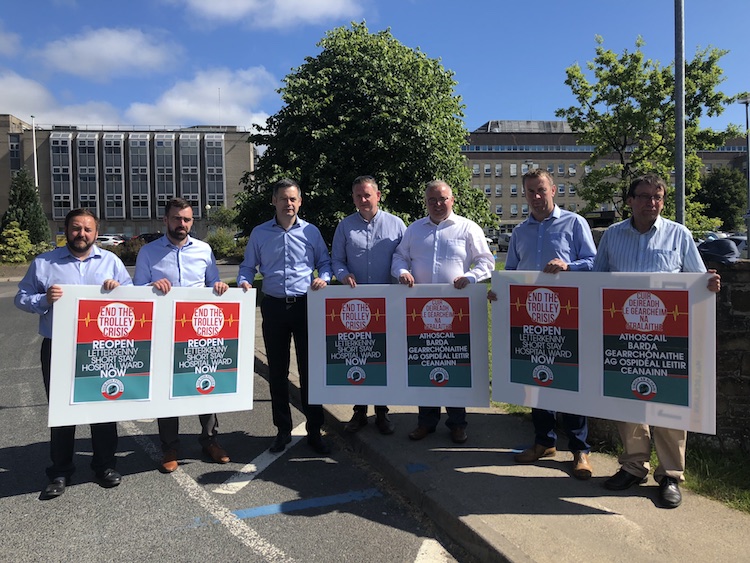 Donegal Sinn Fein this morning launched a campaign demanding the reopening of the 19-bed short stay ward at LUH.

Deputy Doherty was joined by Senator Padraig MacLochlainn and local Sinn Féin councillors as they rolled out a petition and announced a cross-platform media campaign to re-open the ward.

“It is a huge crisis and has been massive chaos having so many patients without a bed and having to sleep on a trolley,” Deputy Doherty said.

“Over the last year, we have seen nearly 5,000 patients on trollies, in accident and emergency and right throughout this hospital.

“During that time, we see a ward closed down. Last year, an average of 19 patients lay on trollies every day here and at the same time, mere metres away, we have 19  beds that have been laying empty. It is absolute absurdity.”

Management at LUH have applied for €1.8million in funding which would fund the staff to reopen the short stay ward.

Last year, LUH tabled a proposal to Saolta under the Critical Unmet Need and Winter Surge initiative to reopen the ward, but it remains shut.

Deputy Doherty said: “We are calling on the Government to make the necessary investment of €1.8million that has been requested by the hospital management to make sure that these 19 beds are opened.

“We have to make the demand to Government very clear. We want action and we want the short stay ward to open.”

It is estimated that the short stay ward could be reopened within a month post-approval if the bid were successful.

Senator Mac Lochlainn said: “It’s the sixth largest hospital in this state withy an average of 23,000 inpatients going through the hospital each year. It has been neglected over the years.

“We demonstrated in a document last year the need to invest. The major hospitals in Dublin were receiving three or four times more funding than Letterkenny.

“You can understand because they deal with more complex difficulties that there would be a difference – but three or four times more? That’s not acceptable.

“This campaign is focussed on a very simple issue. We have 19 people on average on trollies – elderly, distressed people – and that isn’t what the staff or anyone here wants to see.”