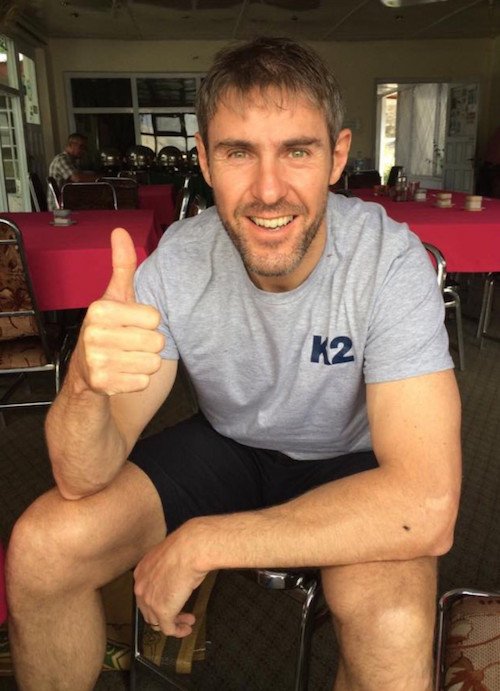 Jason Black reaches K2 base camp ahead of summit attempt

Irish Red Cross ambassador and Donegal man Jason Black has just reached K2 base camp in Pakistan ahead of his ascent of the world’s second highest and most dangerous mountain.

Jason is a global endurance athlete who has previously summited Everest, and he holds the mountaineering world record for the double ascent of Kilimanjaro in 22.5 hours.

And this is not Jason’s first attempt at K2.

He made it as far as camp two in 2015 but no further, as mother nature had other plans and he had to turn back.

The first and only Irish person to conquer K2 is Limerick native Ger McDonnell who died in an ice avalanche on his descent ten years ago, after successfully rescuing three stricken climbers.

Today, Jason placed a plaque from the Irish people at K2 base camp in honour of Ger.

Jason expects to reach the peak of K2 on 2 August, which is the ten-year anniversary of Ger’s death.

Speaking before he departed for Pakistan, Jason said; “I recently visited Ger McDonnell’s family in Limerick and they are fully backing me in the climb. Ger’s Mum Gertie gave me some of his precious equipment to climb with and it means a lot to me; I’ll mentally be climbing with Ger.

“I’ll be spiritually connected to him through the equipment and to some people that doesn’t make sense, but to me on a mountain where you’re alone, and it’s a big vast mountain, and you’re away from civilisation, you cling on to any small support and positive energy, and anything that makes life a little bit easier on the mountain. It gives you strength.”

“I got up as far as camp two the last time and there’s four camps before the summit, so I do know half the mountain” says Jason. “It makes the enormity of the climb a little bit easier to digest, the knowing of what it’s going to take the climb the thing and the enormity of the exposure that’s involved.

“You’re reading all the statistics before you leave Ireland – the fact that just over 300 people in the world have ever got to the top, and of course the death rate, so my knowledge of K2 from the last attempt helps break in it down in terms of knowing exactly what it is I have to tackle.”

The weather on the summit of K2 generally consists of 200-miles-an-hour winds, but for four days, the weather becomes calm on the top – “and that’s when you have to strike,” says Jason.

“It’s going to call on every bit of mountaineering skill that I have in my body, not only from a skill and physical perspective, but mentally, I need to stay strong to deal with the lack of oxygen, and to try to make good conscious decisions on the mountain because if I can’t make good strong conscious decisions, then I can’t survive.”

Of course for many people the question for Jason is, why?

“But it’s a very humbling experience, honing and crafting my skills to be able to do it. I want to use my time on K2 to show that with self-belief, dedication, commitment, hard work and training you can achieve anything in this world.”

Jason is also using his time on K2 to raise awareness about the work of the Irish Red Cross in his role as an ambassador for the charity.

“I’m very proud to be carrying the Irish Red Cross badge on all my clothing for the climb of K2,” says Jason. “It is such a humbling experience to be asked to be an Irish Red Cross ambassador. The Irish Red Cross has reached out to help in local communities all over Ireland on so many occasions, particularly in the last year during Beast from the East and Storm Ophelia.

“I also saw, first hand, the hard work of Irish Red Cross volunteers in my own home county during the Donegal Floods last August. I want to use my time on this mountain to raise awareness about the Irish Red Cross and the work they do – and what they actually achieve, from a humanitarian perspective, both at home and abroad.”