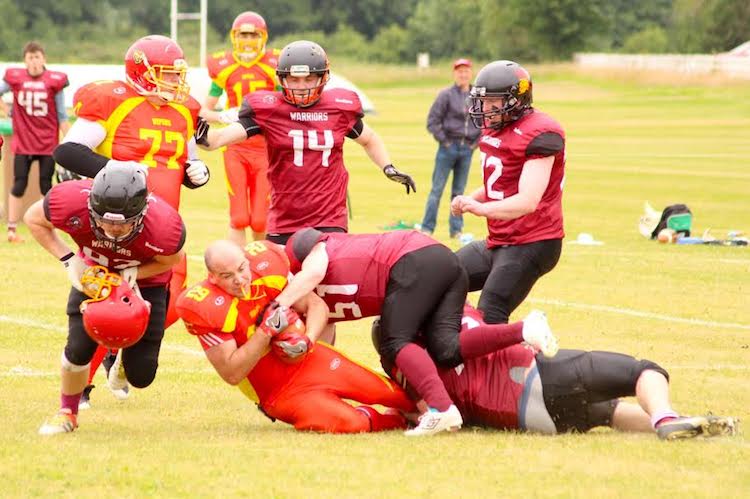 Limavady Rugby Club set the scene for an almost flawless performance by The Vipers on Sunday as they had too much for the Galway Warriors.

In the visiting Warriors the men from the North-West would meet a familiar foe. This was the fifth game between the two sides inside four years, with The Vipers having lost the first ever game between the two. But that was a short lived record and after Sundays game The Vipers are on a four-game winning streak in this fixture.

As the first seconds of the game ticked away Vipers Running back Kyle McAneny burst through a huge hole created by his O-Line and stomped his way down field for a TD shedding tackles as he went.

With Gary Melly adding the XP these early scores would set the tone for how the game would continue.

On The Warriors next drive a botched snap saw the defensive Lineman Peter Farrell come up with the ball for The Vipers as he added another huge play to his ever expanding highlights reel.

With the ball just shy of the Red Zone, Running back Cathal Curran and McAneny once more ran the ball up the gut and The Vipers O-Line, led by Barry O’Kane at centre, dominated the line of scrimmage. 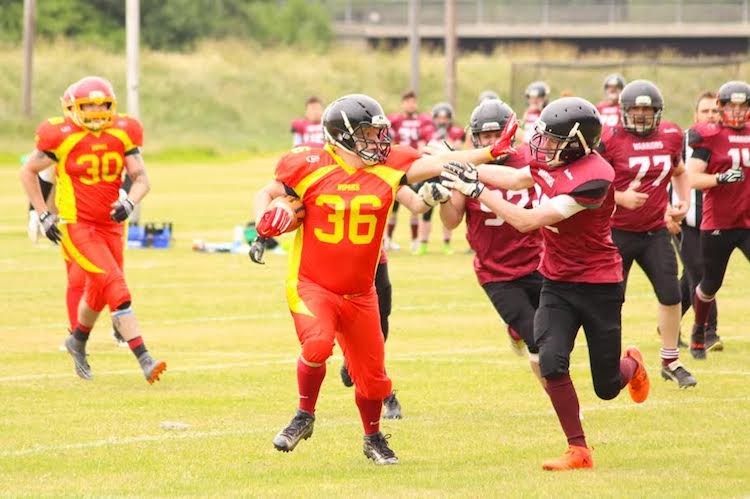 Vipers running back Kyle McAnerney storms up the field

As the end zone drew closer QB Danny Mullan spotted Tight-End Derm Brown in the EndZone for the TD. This would be the first of Brown’s three TDs on the day.

After another short Warriors drive in which the Vipers defence nullified the run game the ball was back in QB Mullans hands. With a TD in the air and one on the ground Mullans next big play was the first of his three rushing TDs.

As he swept outside he simply outpaced The Warriors and put The Vipers up 19 – 0 before the end of the first quarter.

Mullan would score again early in the second quarter. Another sprint from the Strabane man saw him run the ball in and with Melly again adding the XP the score stood at 26 – 0. But The Vipers weren’t done yet, TE Derm Brown smashed in his second before the half to put the Vipers up 33 – 0.

With such a high scoring half it would be easy to forget that The Vipers defence was in inspired form and as the half ended the defence had not conceded a point all game.

Tackles by Paddy McGlynn and Paddy Farrell and huge stops by David Currie and Paddy Maguire saw the Vipers defense exert control over the Galway men.

This continued into the second half and the only Warriors score came from their defence. As QB Mullan drew his arm back to pass the ball it popped out only for Galways Colin o’Halloran to pick it up and run it into the EndZone. While the defensive clean sheet was intact the score was 33 – 6.

The Vipers offense then entered the field again in the third quarter and QB Mullan completed his hatrick of TDs with a well blocked run to the outside and after a quick three and out for the Warriors, Derm Brown notched up a hat-trick of his own to put the Vipers up 46 – 6. 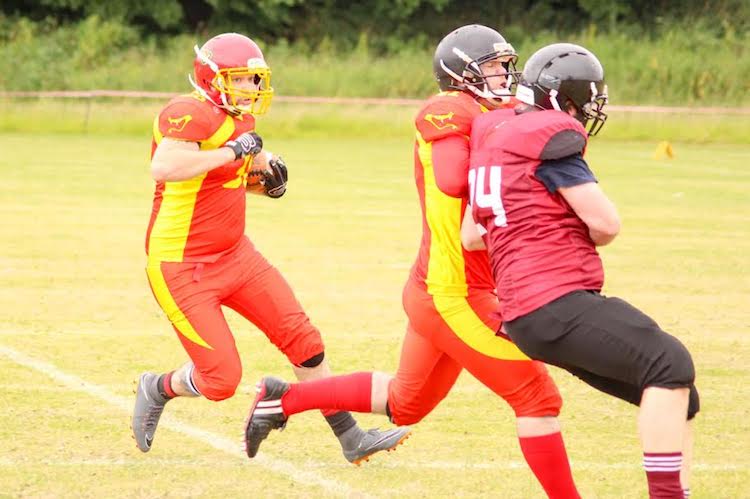 Derm Brown on route to his second touchdown for the Vipers

Deep in the four and The Vipers weren’t finished yet. RB Cathal Curran smashed his way up field for a gain of 40 yards in spite of some bone crunching tackles. Curran seemed to shake them off and kept driving. With the ball now inside the five-yard line Curran hammered in the 8th Vipers TD to end the game 53 – 6.

It was everything you could ask for in a game for The Vipers, a mammoth performance by the Vipers defence and 8 TD’s by the offence.

Next up for The Red & Gold is their Annual Letterkenny Game at 2pm on 8th July at Colaiste Ailigh were they will bring their trademark vigour and verve to Donegal. The face off against The Antrim Jets who are chasing the final play-off spot in IAFL1.

There will be refreshments supplied by The Kernans Group, Nandos Derry will be onsite and Community Recycling Initiative have supplied a Bouncy Castle for the Little Vipers in attendance.