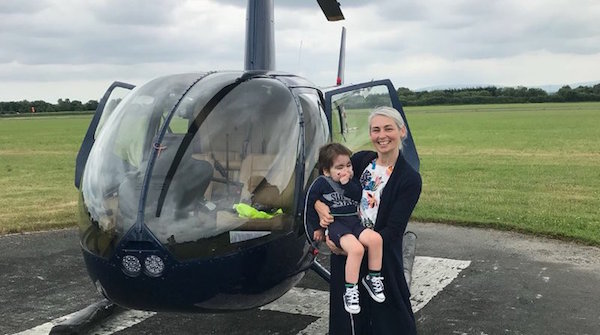 Donegal lad gets his wings during hospital appointment to Dublin!

A young Donegal lad has been flown for hospital treatment in Dublin in a helicopter in the arms of his mother.

Last week the helicopter wing of BumbleAnce, namely BumbleAir, flew little Oisin Campbell from Donegal to the capital and back again in the arms of his mother – a first for the family.

Thanks to BumbleAir – a charity that transports sick children across Ireland for medical treatment – Oisin, aged 3, was able to travel to and from his appointment in Our Lady’s Children’s Hospital in Dublin in the arms of his mother, Fionnula Doherty.

Fionnula doesn’t travel well on long journeys by car so this trip was an emotional milestone for the family.

Pilot Ryan Hanrahan told RTE “This is one of the most profound flights that I’ve ever done as Fionnula told me that this was her first time travelling with Oisin together on a trip because, normally, her father would travel by road.

“She doesn’t like travelling by road so she normally flies down and meets them so she’s always waiting for texts and updates from the father just to see how Oisin is doing.”

The toddler, who hails from Derrybeg in Gaoth Dobhair, was diagnosed with a rare chromosomal abnormality and has to travel for multiple hospital appointments which can take up to eight hours to get to by car.

While this trip was undoubtedly memorable for the family, it also served as an important reminder to Ryan as to why he works so hard for this charitable service.

He explained: “I remember turning around and looking at Fionnula and she was smiling from ear to ear and just so humbled, she just could not believe it.

“Just so, so happy, holding Oisin in her hands for the whole flight and he slept most of the way he was so happy and she was just smiling, looking out the whole time and asking questions and just couldn’t believe that she was doing it.”

“It just re-emphasised why I’m doing all this and putting all the hard work in to make this happen because it is absolutely amazing and has such an effect on the family,” he said.

The journey took just one hour and 20 minutes by air and afforded a comfort to the family that was absolutely priceless. More below.

However, Ryan was quick to thank everyone involved in the journey including the airport staff.

“All the staff in Donegal were phenomenal and the staff in Sligo airport were brilliant because they waved all our landing fees and they were just very helpful once we landed to get fuel in Sligo and when we landed with Fionnula and her son in Donegal so it’s really well received by the workers there as well so big thanks to them,” he said.

Donegal lad gets his wings during hospital appointment to Dublin! was last modified: July 6th, 2018 by Stephen Maguire