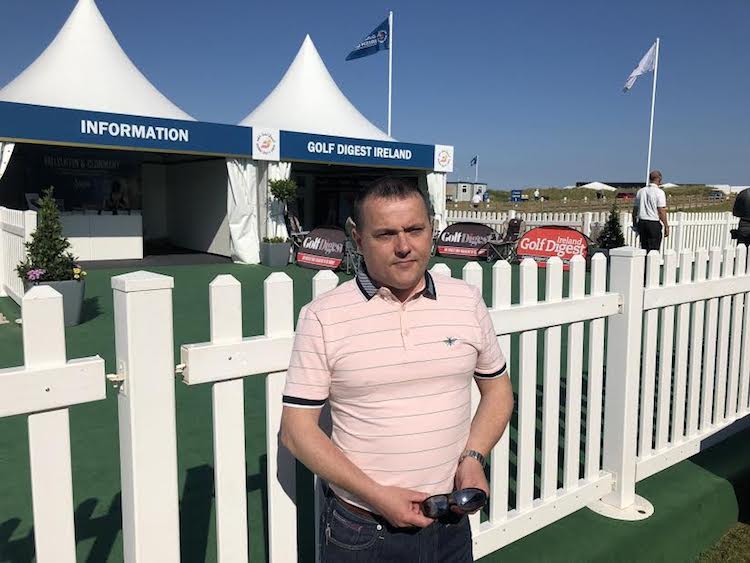 European Tour officials are said to be ‘astounded’ by what they’ve witnessed so far in Ballyliffin.

The 2018 Dubai Duty Free Irish Open is being hosted in Ballyliffin Golf Club this week. At the weekend, European Tour officials basically took over the running of the scenic Inishowen course for the week.

It came after a huge amount of preparatory work, ever since those early days when the seeds were first sewn and locals wonder if even the possibility was too distant a dream to have.

And yet, here, they are with Rory McIlroy, Jon Rahm, Graeme McDowell, Padraig Harrington, Chris Wood, Danny Willett, Rafa Cabrera Bello and company teeing off on their famous Glashedy Links.

“Everyone is buzzed up now at this stage,” says Inishowen-based Fianna Fáil Councillor Martin McDermott (pictured), whose brother Paddy is club captain at Ballyliffin Golf Club.

“There has been three years’ work put into this by Ballyliffin, by the Golf Club, the members, by the Council, Failte Ireland and it has all come together. It’s just fantastic.

“There are so many volunteers and groups who have made Inishowen proud today.

“The weather just makes it even more special. It wouldn’t change the work that has gone in, but it does put the hat on it when you see the place in such beautiful weather. It’s a fantastic day for everyone.”

McDermott believes the impact will stretch far beyond this weekend.

The event will be beamed across 500 million homes worldwide with 100,000 visitors expected this weekend alone. This week, the greater Inishowen area will receive an economic boost of some €10 million with anything up to €90 million estimated to be the overall benefit to the peninsula.

Already, visiting officials have been mightily impressed by Donegal’s show.

Given his close family ties to the course, McDermott is well aware of the spade work and the hard graft that has made this week possible.

Vision, foresight and ambition have been key to making a dream come true.

McDermott said: “The work is crazy. John Farren contacted me a couple of years ago about the possibility. People would’ve said ‘aww, we’ll never get the Irish Open in Ballyliffin’. It has come here and it will be one of the most successful ever Irish Opens. We do it better than anyone because we have the community spirit. You need the community buying in and we have that so much in Donegal.”