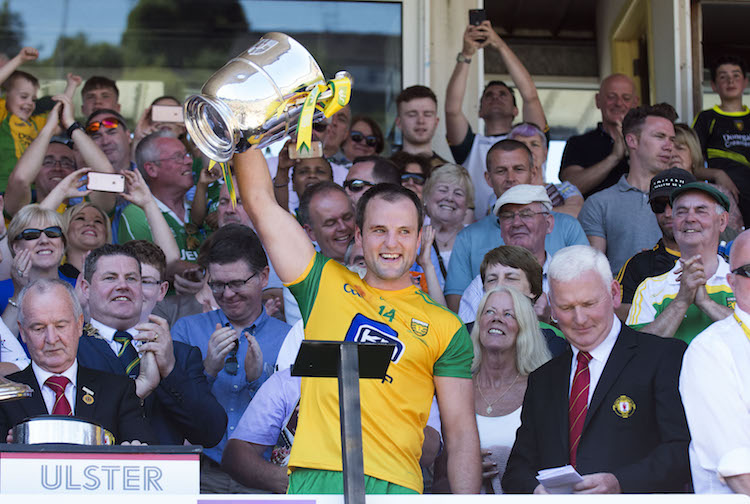 Michael Murphy not expecting change for Donegal clash with Dublin

Donegal captain Michael Murphy is preparing to lead Donegal into battle at Croke Park – and doesn’t expect Saturday-week’s Super 8 tie with Dublin to be moved from GAA headquarters.

Donegal GAA confirmed last night that they have sought a meeting with GAA officials over what they believe to be an unfair playing field that sees Dublin play two of their Group 2 games at Croke Park.

Donegal say they are seeking clarification ‘on how any county may use a ground as both neutral and a home venue’.

The nub of Donegal’s dispute is that the Dubs will have another home fixture – against Roscomon or Armagh – at Croke Park, while the other teams in the group will play just once at home. In Donegal’s case, it will be the August Bank Holiday weekend against Tyrone or Cork.

“The first round is at Croke Park…the first game has been set in stone since Congress so we’ll be togging out at Croke Park as far as I’m aware,” Murphy said.

“As players, we’ll tog out wherever the hell the game is. At the moment that’s Croke Park and that’s where we expect to be.

“The county board and management will deal with whatever else. What they’re looking at is fairness and equality.”

The Donegal manager, Declan Bonner, has been quite vocal about Dublin having two home games to look forward to.

Murphy, speaking in Ballyliffin where he is playing at the Pro-Am in the 2018 Dubai Duty Free Irish Open, says Donegal – who will be without the injured Patrick McBrearty – are just focusing on the football.

The Glenswilly man said: “It’s a huge game for us on the back of an Ulster final. We’re preparing for a game against Dublin and we’re just looking forward to getting stuck into it. That’s all we can prepare for at the moment.”