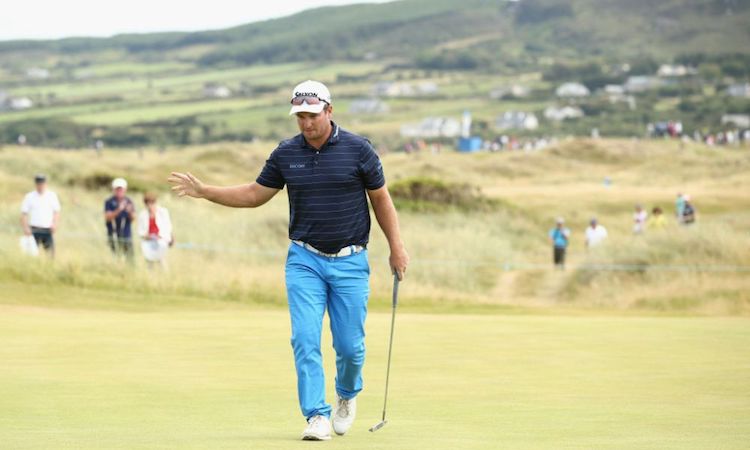 It’s a three-way tie at the top of the leaderboard at the halfway point in the 2018 Dubai Duty Free Irish Open in Ballyliffin.

Ryan Fox, Matthieu Pavon and Erik van Rooyen lead the way on eight under par with Joakim Lagergren at seven under and a further three players sitting nicely poised at six under.

It’s not just the Irish Open glory that’s at stake with a battle royale taking place for the three qualification spots for The Open Championship at Carnoustie.

Van Rooyen is already qualified, but Fox, Pavon and Lagergren are now in the leading qualification places.

Fox was the overnight leader from the first day and drove in a round of 69 today.

“It’s probably my first time in one of these events being right up there. Probably leading or going to be in the last group, which is going to be a nice experience tomorrow.

“Seven or eight under is not going to win the golf tournament. You have to get it double digits.

“I’ll take the golf course on if it’s there. We’ve been lucky with the wind, it’s been obviously down today, as well, but I can take on a couple of bunkers with the wind direction it’s been. If it blows the other way, I have no chance. I’ll just take it how it comes and that’s the great thing about links golf.”

Lagergren shot a 68 for a four-under round to move onto seven under in total, while Van Rooyen fired a course-record 65.

“I hit it beautifully tee-to-green all day, holing a few nice putts including a long one on my back nine as well, so I’m playing very nicely,” Van Rooyen said.

“It’s exciting being here. I love links golf even though I haven’t played much, I’m fairly new to it but I absolutely love it.”

Pavon repeated his 68 round from Thursday and was delighted to have improved over the day.

“I started not that great,” the Frenchman said.

“I hit some really bad shots over there, like on 18, I was lucky to be on the 17th fairway but it’s pretty far left. But the putter was pretty warm and it keep me in touch with the scorecard and then I started playing well on the back nine, like the six or seven last holes were very good.”