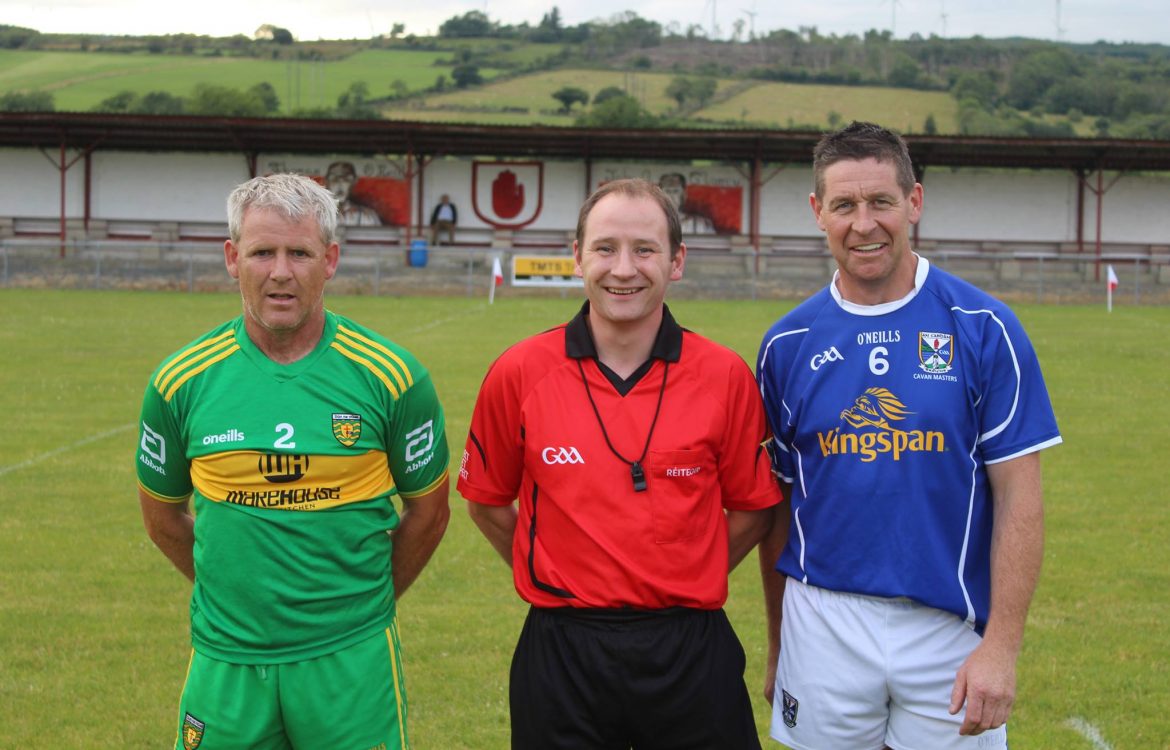 Donegal Masters go down to Cavan in Ballyconnell

Donegal went down to Cavan in the All-Ireland Masters Championship on Friday night away in Ballyconnell, Co. Cavan.

Val Murray’s charges, missing a few men due to holidays and injury, battled all game against a dogged Cavan team who were out to thwart a Donegal side that had been unbeaten all year, with 4 wins from 4 so far in the competition.

Despite the close nature of the game all through out, Donegal were never behind the home side until the 52nd minute when a point and a goal surged Cavan into a 4 point lead. Donegal enjoyed the majority of the possession early on with points from St. Michaels man Brian McLaughlin from play, after having a goal chance saved and McLaughlin was again involved when Glenswilly’s Charlie Bonner launched a ball up to McLaughlin but the Cavan team committed a foul and Shaun Boyce from the Seán Mac Cumhaill’s club converted the free.

Cavan had their chances too but their shot selection and taking let them down badly at times and recorded 7 wides in the first half. Two wide efforts were sandwiched between a goal chance from their full forward. At the back, Kilcar man Ross Brady had to break a Cavan attack down. Cavan would get on the scoring charts after 7 minutes with a point from play and a free.

Mickey “Sticky” Ward threatened the Cavan goals at the half way mark after Benny Cassidy had played him in but his effort rattled the side netting. Ward made amends shortly after pointing from play with Cavan trying to reply but added another 3 wides before pointing t take it back to 2 points.

Points from Paul Gallagher, McLaughlin and a fine Cassidy effort from out on the right would see out the half for Donegal with Cavan clawing 3 back to have Donegal going in at half time 1 point to the good.

Donegal drew first blood in the second half with Stephen Cooney pointing from play. Cavan replied through play again but their wides tally again increased and Donegal kept ahead by a point for most of the second half. On 42 minutes Donegal had a free which Four Master’s man Benny Cassidy took, but the shot ricocheted off the bar and the Cavan defence did enough to clear it from immediate danger, but Brian McLaughlin won possession and fired over a fine long range effort.

Two points from Sticky Ward (frees) kept the score board ticking for the Tir Chonaill men but Cavan hit a purple patch and would hit 1.03 in a 4 minute period. Cavan’s first score in this patch was fine point from play in, while the next, was crafted well from a short free to fire over to put the home side into the lead for the first time in the game. Donegal were caught out of shape and an exquisite ball in found a Cavan man who beat Martin Gillespie in the Donegal nets.

Sticky Ward (free) and Brian McLaughlin point from play finished the scoring out for Donegal as they chased the game looking for a late equaliser or winner but the Cavan full forward put 3 points between the sides and Cavan took the victory on the night.

Many thanks to Kildallan GAA club in Ballyconnell for hosting the game. The Masters next game is an away game against Antrim the weekend of July 20th.