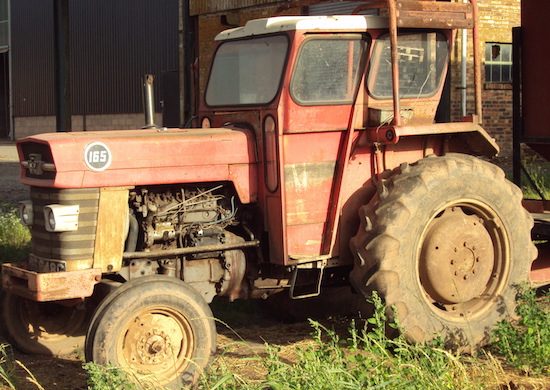 A drunk farmer who hitched a lift from his son on the back of his tractor exposed his backside after his trousers fell down during a pursuit by Gardai.

The driver of the Massey Ferguson tractor appeared before Letterkenny District Court in Co Donegal charged with dangerous driving.

The court heard how Gardai spotted an elderly farmer clinging to the back of a tractor on the night of November 7th, 2016.

Garda Inspector Barry Doyle said Gardai had been on routine patrol close to the Kilross Junction around 11.15pm when they came across the incident.

The tractor was being driven by a younger man and the older man was standing on a link bar at the back of the vehicle.

The tractor was being driven by Charlie McFadden of Dooballagh, Letterkenny, who is in his 40s and his father was standing on the rear of the machine.

Gardai estimated that the tractor was being driven at speeds of up to 60kph along the hard shoulder.

Inspector Doyle said the male was clinging on to the vehicle and commented “He could have fallen off at any stage. It was extremely dangerous.”

Gardai were then forced to activate their siren on their patrol car.

Upon doing so, Charlie McFadden stopped the tractor suddenly causing his father’s trousers to drop leaving his “backside fully exposed”, according to Inspector Doyle.

When interviewed, Gardai told the court that Mr McFadden senior was intoxicated.

Solicitor for the accused, Mr Ciaran Haran said he was not sure if Judge Paul Kelly had ever had the pleasure of driving a Massey Ferguson tractor.

He said that he personally had and disputed the fact that it could travel at 60kph and had checked this with local company Donegal Farm Machinery.

He said his client had been contacted by his father from the local pub and was giving him a lift home.

He apologised to the court and he said his client had genuinely not heard any siren form the Garda patrol car.

Judge Kelly asked Mr Haran if the tractor in question was a vintage model and Mr Haran replied that it did have an ‘IH’ registration which meant it was made pre 1988.

Judge Kelly replied, “I think that I have heard everything now.”

He reduced the charge from dangerous driving to one of careless driving and fined Mr McFadden €200.