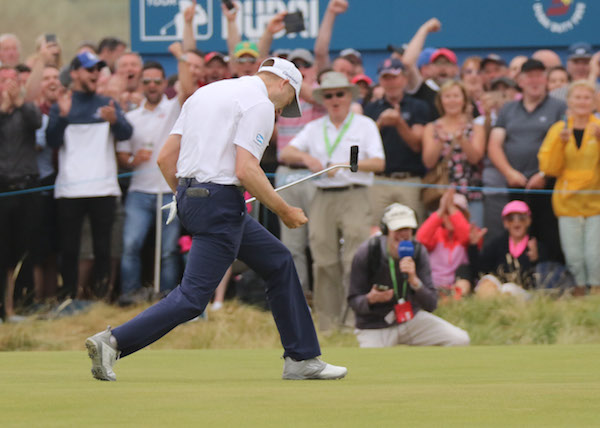 But the real winner this week was Donegal and its people.

The county rowed in behind the people at Ballyliffin Golf Club who can feel justifiably proud of pulling off an amazing tournament.

The names of McIlroy and Harrington may not have been in the shake-up in the end.

But there was still a hugely exciting finish for the tens of thousands of fans who turned up at the Inishowen venue.

Knox holed from 40 feet for birdie across the 18th green in regulation to join Fox on 14 under par, the New Zealander then missing from eight feet for a birdie of his own to win the title.

And when the players returned to the 18th for a sudden-death play-off the situation was repeated, Knox holing from almost exactly the same place for birdie before Fox saw his attempt from close range catch the edge of the hole and spin out.

“It’s tough to describe how amazing this feels,” Knox said at the presentation ceremony. “Unbelievable. I can’t believe I’m holding this (trophy).

“After I made eagle on the fourth I knew I was in it. The putts have been going in the last couple of weeks, I had a great feeling on the greens and I just kept going.”

Speaking about the two putts on the 18th, Knox added: “It’s why I play golf, all the practice, all the misses, all the bad moments are taken care of with putts like that.

“Making two of them from an almost identical position is obviously a bit of a bonus. I’m so happy. I said (on the play-off hole) we’ve already made this putt, it can’t be too difficult. I feel bad for Ryan but I guess it was my time.”

Spain’s Jorge Campillo finished a shot outside the play-off after a brilliant final round of 65, with defending champion Jon Rahm another stroke back following a remarkable 66 which included a triple-bogey seven on the second and five birdies in the last six holes.

South Africa’s Erik van Rooyen began the day with a four-shot lead but struggled to a 74 to finish alongside Rahm on 12 under.