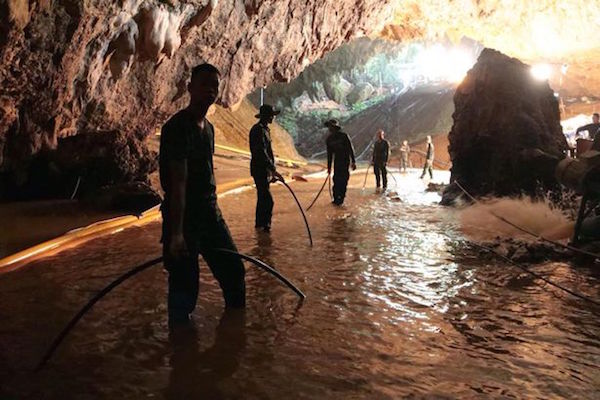 World News: Four of 12 schoolboys trapped in cave have been rescued

Four of the schoolboys trapped in a Thai cave for more than two weeks have been rescued.

There are now high hopes to save the eight other boys and their teacher but the operation has been temporarily halted.

The world has watched as a major worldwide rescue bid to save the boys was launched.

The rescued boys were immediately taken to a field hospital where they were assessed by medics.

In a press conference this afternoon, operation chief Narongsak Osottanakorn said the four boys who have been rescued are in “perfect condition”.

The rescue operation has been halted as they need 10 hours to prepare for the next mission.

Eight boys and their coach are still in the cave and it could take another day to get them out.

The operation has been temporarily halted and will resume in 10-12 hours to give rescuers time to prepare for the next stage.

The mission – called “D-Day” by its leader – began this morning when rescue divers, including Brits, entered the flooded cave after almost a week of preparations.

Officials acted quickly after torrential rain stopped falling, and they had warned that it could take about 11 hours for the first survivors to emerge, and possibly days for everyone to be extracted.

The mission appeared to be moving swiftly as day turned to night.

Chiang Rai governor Narongsak Osottanakorn told reporters he had met the children, adding they were in “perfect” health.

It took about eight hours for the first two to emerge around 5.40pm local time.

Tossathep Boonthong, chief of Chiang Rai’s health department and part of the rescue team, told Reuters after the first group emerged: “Two kids are out.”

At least four boys had emerged from the the Tham Luang Cave, in northern Chiang Rai province, by 8pm local time.

A senior member of the rescue team had told Reuters: “I have received information that six have exited the cave.”

But Mr Osottanakorn told reporters that four had been led out and taken to hospital.

The 12 schoolboys and their coach entered the cave on June 23.

All were taken to Chiang Rai hospital, about 60 miles from the cave, by air and ground ambulances.

An Australian doctor assessed the boys’ physical and mental health to decide who would be rescued first.

World News: Four of 12 schoolboys trapped in cave have been rescued was last modified: July 8th, 2018 by Stephen Maguire