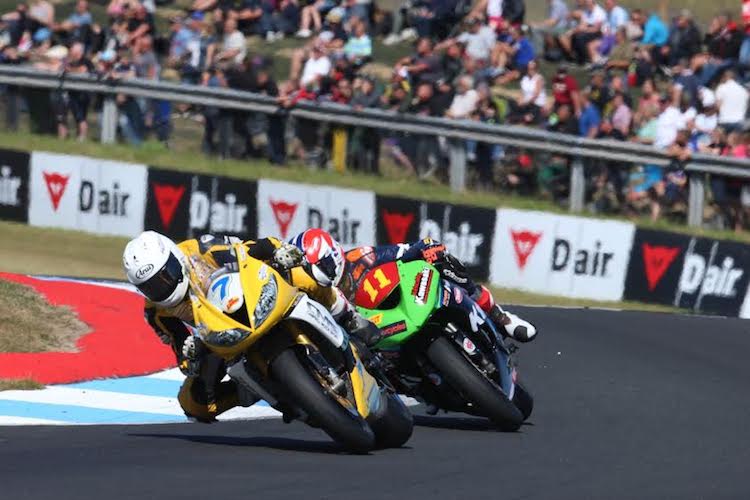 Richard Kerr had another good weekend at Knockhill in Scotland for the fifth round of the Dickies Supersport Championship that runs alongside the British Superbike Championship (BSB).

After a difficult start to this season on the new machine, Richard is getting to grips with the bigger bike and is improving each meeting.

It was always going to be a big step up from the Motostar Class where Richard was a front runner the past two seasons  to the highly competitive Supersport class with a field of vastly expirienced riders.

After qualifying in16th position on Saturday and less then 1.6 seconds of the leader Richard had high hopes for a good finish but didn’t get the best of starts on the short and twisty circuit – one of the shortest on the calendar but also one of the most physically demanding there is.

After the 16 lapper Richard finished in 18th position.

Race two and Richard found himself starting from the 7th row of the grid but got  good start this time around and was running in 15th for the opening laps and was up to 13th in the later stages of the race.

He was involved in a great battle with Tom Oliver who currently lies in 6th place in the Championship and was also a podium finisher at Doninton Park.

Richard eventually finished in 14th position overall and 12th in his class and another hard earned 4 points in the bag.

Next meeting for the team is Bands Hatch in two weeks’ time where he will be looking to break into that top ten.

Richard would like to thank Campbell Motorsport and  all his sponsors for their support as without them it would be impossible.

On a sadder note Richard would like to offer his condolences to the family of William dunlop whom Richard raced against several times this season after his untimely death at the Skerries Road Races following a tragic accident on Saturday.