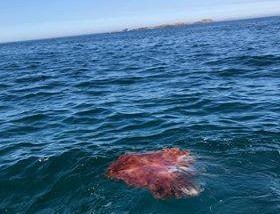 Ireland’s jellyfish research experts have issued advice on how best to treat a jellyfish sting after five people were stung by the potent lion’s mane species.

THere has been an increase in sightings of the dangerous species in Irish waters including Donegal with photos taken off Malin Head in recent days.

According to researchers in NUI Galway, the best first aid treatment for a lion’s mane sting is to rinse with vinegar (or the commercial product Sting No More® spray) to remove tentacles.

Experts will meet with the Beaumont Poison Centre at Beamount Hospital Dublin to discuss these their findings, published by NUI Galway in the international journal Toxins in 2017.

The lion’s mane jellyfish is a large jellyfish (up to 1 metre bell diameter) with thousands of long tentacles located beneath the bell.

In Irish and UK waters, lion’s mane jellyfish can be encountered from June until late September.

It is one of the least abundant jellyfish in Irish and UK waters, typically occurring as single individuals rather than in blooms or aggregations.

Despite being one of the least abundant jellyfish, relatively high densities of large lion’s mane jellyfish have been recorded close to high population areas in recent weeks, and therefore stings have been a recurrent concern, NUI Galway says.

Five people have now been hospitalised after being stung.