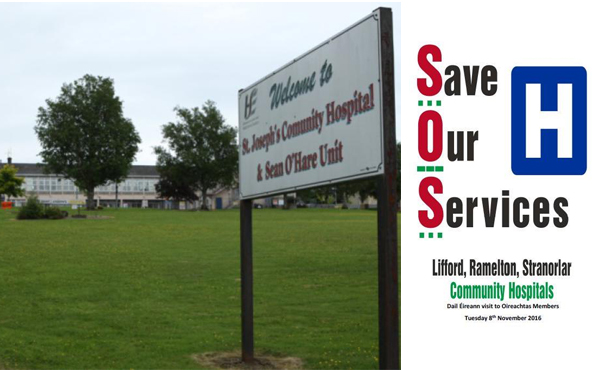 I am relieved that the statement from the Save Our St Joseph’s Hospital action group finally awoke the Junior Minister Jim Daly from his slumber of the last 137 days.

You could say that one can only surmise that the Junior Minister must have put too much coal on the fires of his political career and fell asleep on this issue but, this question on the Donegal Community Hospitals is far too serious an issue and is simply not going to go away conveniently for this Government.

The reality is Junior Minister Daly’s incompetence in relation to the ongoing Community hospitals’ crisis in Co. Donegal is seriously concerning and frighteningly worrying but it is no different to the overall incompetence and ineptitude of this entire Government to Health matters and more particularly to health matters concerning the elderly and those living in rural areas especially.

This Government has consistently failed those living on the margins within our country – record homelessness, record numbers awaiting treatments in our hospitals, record waiting lists for social houses, record poverty levels, especially child poverty – every record for the marginalised has been twice if not three times smashed by this Government but alas does the Dublin 4 focused media care? Perhaps not, but we here in Donegal do care and we will continue to care.

On the 1st August 2017 last, Junior Minister Daly went on a local radio news programme to deliver a sound bite in what was a bizarre and unprecedented move in the history of the state to confirm that an answer given to a Dail question over future of three community hospitals in Donegal was the wrong one, it was inaccurate maybe even the information was outdated – it was a latter day Sir Humphrey moment in politics.

This was in response to a question tabled the previous week by Deputy Pat the Cope Gallagher, where in Dail Eireann Minister Daly said the proposed nursing unit in Letterkenny would replace existing long-stay accommodation provided at St Joseph’s in Stranorlar, and Ramelton and Lifford Community Hospitals.

Minister Daly went onto the local radio news programme to say that he had been given “outdated information” on the matter… yet the reporter in questioning the Minister asked, “so the long stay care at those hospitals is secure well into the future”, junior Minister Daly responded with a lot of waffle.

Minister Daly visited the county and addressed a Fine Gael public information meeting and was bizarrely attended by senior officials from the HSE in Jackson’s Hotel Ballybofey. Both at the meeting and when the following day he went on the local radio current affairs programme the Nine ’til Noon Show on Highland Radio, Minister Daly refused to give any specific commitments or guarantees on the show for the long term beds, dementia or indeed the Short stay beds at the 3 community hospitals.

Junior Minister Jim Daly failed to respond to calls to correct the Dail Record from July 2017, that the proposed nursing unit in Letterkenny would replace existing long-stay residential and dementia accommodation provided at St Joseph’s in Stranorlar, and long stay residential in Ramelton and Lifford Community Hospitals.

On the evening of Tuesday 20th February last, as Minister Daly was on his way into Jackson’s hotel, Ballybofey, in an attempt to destroy for narrow political purposes the Save Our St Joseph’s Hospital action group’s campaign and it’s objectives, his colleague in the Department of Health, Minister Catherine Byrne was on the floor of Dail Eireann reinforcing what Minister Jim Daly stated on the Record of Dail Eireann in July 2017 and the Government policy announced by Minister Kathleen Lynch on 26th January 2016, to replace existing long-stay, dementia and short stay accommodation provided at St Joseph’s in Stranorlar, and and Ramelton and Lifford Community Hospitals with a new public/private community Hospital at Letterkenny.

We can see from a parliamentary reply from Junior Minister Daly to Leas Ceann Comhairle Pat the Cope Gallagher as late the last fortnight, that there are no plans in place for the future of St. Joseph’s hospital Stranorlar, Ramelton or Lifford as Community Nursing units for long stay residential and dementia care.

Junior Minister Daly in his response to my recent statement was clearly awoken from his 137 political slumber – to do what he does best, to respond to the crisis facing our 3 community nursing units by saying a whole lot of nothings, by spoofing the same old rubbish, holding the line until he gets the new PPP community hospital at Letterkenny over the line.

There was neither reason or rhyme to the Ministers statement of response to our action groups charge that the Government had attempted to hoodwink the people and were only paying lip service to St. Joseph’s hospital. The Junior Minister’s response showed no purpose or intent. All he was doing was trying to reinvent and trot out the same old lines that the people are sickened of hearing since 26th January 2016, such lines will not wash with the people of Donegal.

Junior Minister Daly has got off with attempting on a local radio news programme to claim that he accidentally mislead Dail Eireann in July 2017. Nothing could be further from the truth.

He told the truth in Dail Eireann in July 2017, and he and his colleagues have several times in the Dail since and in over 100 parliamentary replies to Leas Ceann Comhairle Pat the Cope Gallagher, Deputies Pearse Doherty, Charlie Mc Conalogue and Tomas Pringle that Government policy does not have a role for St. Joseph’s, Stranorlar, Lifford and Ramelton community nursing units/ hospitals to be providers of long term/residential, or dementia or short stay bed providers in the post 2021 scenario in Co. Donegal and/or when the PPP Community Hospital in Letterkenny operational.

Junior Minister Daly attempted not only to hoodwink the people of Donegal with sound bites and another overdose of political spin.

I now believe the Minister of State is an embarrassment once again to his Government and moreover to himself – gone is the day when we the people will listen to empty political tripe spouting out from an empty vessel and especially one that knows no greater good than saving his political career only . It is time Minister Daly you took a decision that made a real contribution to Irish society – be gone with you for you can no longer do this state any good or service.

Let your colleagues also please take note, as we declare publicly “ we will continue our fight till the end – and our end will be victory for our people and our community Hospitals cause , no Government of whatever political persuasion will defeat the people “. The long stay residential and dementia accommodation units in these three Donegal hospitals will not be privatised, or centralised into one unit – what we have we will hold.

Minister Daly awakes but Donegal is not fooled – Letter to the Editor was last modified: July 14th, 2018 by Staff Writer
Tags:
Save Our St Joseph's Hospital Action Group